Blog - Latest News
You are here: Home1 / News2 / Health News3 / UK Could Have Fans In Stadiums By October 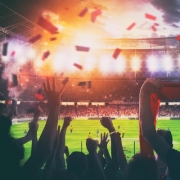 Sports fans in the UK may be able to return to stadiums as early as October, UK Prime Minister Boris Johnson has said. No sporting events have been played in front of fans in the country since March but trials will now be held to test new protocols in the hope of allowing fans to return by the winter.

Cricket and soccer have resumed in the country, both at a recreational and professional level, but no fans have been permitted to attend an event since the Cheltenham horse racing festival just before the country was placed into lockdown in March. It is now thought that the vast amount of fans at Cheltenham, attending when the country was on the cusp of a lockdown, contributed to a large number of Covid-19 cases.

“We will pilot larger gatherings in venues like sports stadiums with a view to a wider reopening in the autumn,” said UK Prime Minister Boris Johnson last week.

“From October, we intend to bring back audiences in stadiums. Again, these changes must be done in a Covid-secure way, subject to the successful outcome of pilots.”

Pilot events will be held in order to test the efficacy of the guidelines and policies that will be in place to help keep fans safe and the spread of the disease as small as possible. Such events will take place from August 1 onwards and according to the BBC, include two county championship cricket matches, the World Snooker Championship in Sheffield and the Goodwood horse racing festival that begins at the start of August.

“For months, millions of us have felt the void of being unable to go to the match to support our team or attend a top-class sporting event,” said the UK’s Sports Minister Nigel Huddleston.
“So I am pleased that we are now able to move forward with a plan to help venues safely reopen their doors to fans.

“I recognize that not every sport, team or club has the benefit of huge commercial revenue, and it is often their dedicated fans that are the lifeblood which helps keep them going. By working closely with sports and medical experts, these pilots will help ensure the safe return of fans to stadiums.

“Although it will remain some time before venues are full to capacity, this is a major step in the right direction for the resumption of live spectator sport across the country.”

The UK government has outlined operating guidelines that state that in order to return to stadiums, fans must agree to a new code of behavior that includes not attending if they potentially have symptoms of coronavirus or have been exposed to a person who has tested positive.

Additionally, social distancing will have to be observed in seating arrangements and in areas that fans can potentially gather. Crowd management plans will also be in place and plans will be devised to ensure the controlled entry and exit of fans and one-way systems.

Extra hygiene facilities are also to be installed inside venues, particularly at entrances and exits and policies for screening procedures at stadia entrances will need to be devised and set for the safest possible experience for all involved.

Sports fans in the US will be looking at the progress in the UK to see whether there is hope that they will be able to see their idols perform in the flesh before too much longer. However, the UK has reacted a lot better to the pandemic recently and looks to be slowly getting rid of coronavirus, which is in stark contrast to the US. At one point, the UK was struggling itself with the pandemic so the light being shown at the end of the tunnel will still give hope to the US sports fans sitting at home.

“Throughout this period we will look to allow more close contact between friends and family, where we can. It is my strong and sincere hope that we will be able to review the outstanding restrictions and allow a more significant return to normality from November at the earliest, possibly in time for Christmas,” Johnson announced, giving relief to many across the UK.

“We will be rolling out the biggest ever flu vaccination programme in the history of the UK. I can confirm that we’re providing an additional £3bn of funding for the NHS in England to get ready for winter. Scotland, Wales and Northern Ireland will also receive additional funds. This will allow the NHS to continue to use the extra hospital capacity acquired from the independent sector, and also to maintain the Nightingale hospitals, until the end of March.

“At the start of the pandemic, we knew far less about the nature and the spread of the virus and we had to take blanket national measures. National lockdown was undoubtedly the right thing to do and saved many thousands of lives. Now our intelligence on where it is spreading is vastly improved. That means we can control it through targeted local action instead.”

Plastic Free July: Cut Down on Your Household’s Plastic Waste (Even in a ...
Scroll to top