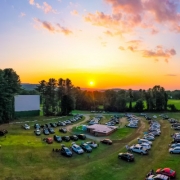 Raise your hand if going to a drive-in cinema, like the nostalgic days of 1950’s America, is on your bucket list. In the UK, this dwindling American pastime, has never really been widely available to the discontent of many. However, it seems that this could now change in the wake of the coronavirus pandemic, as the entertainment industry looks for safe ways to gear up. As the lockdown procedures in the UK are slowly lifting, many eagerly await the gift of our entertainment industry. Theatres, cinemas and concert halls still remain empty until further notice, and large public gatherings are still not authorized in the UK. As social distancing seems to be a measure that will be in effect for a long time, Drive-in cinemas may become a popular form of entertainment for Brits during the summer.

Open Air cinema experiences have grown in popularity over the last few years in Britain. Venues showing a range of different films, to crowds of people sitting in the sunshine on picnic blankets. Several venues across the UK are making use of open air spaces, or even racing tracks, to deliver a similar experience with a socially distanced drive-in experience.

The BBC reported, that drive-ins are not entirely alien to the UK, but previously, very rare. Stating that, ‘there are still only 20 permanent drive-in cinemas dotted around. It is not the country’s changeable weather that have stopped them becoming more commonplace, but the lack of a decent profit margin, says Danny Banthorpe, director of Norwich-based Popup Pictures.’ Perhaps, this new climate could change that picture.

Prime Minister Boris Johnson announced drive-in cinemas in the UK could open in early June. Companies from large to small, old and new are also looking to stage drive-in events over the summer. Some companies will tour the countries, whilst others will set up at a specific location.

Some entertainment companies such as cult (yet increasingly popular) immersive cinema experience company, Secret Cinema, are offering immersive experiences at their drive in. In the UK, Secret Cinema stages annual immersive cinema experiences of popular films. A secret venue is given to the ticket holder nearer the date, who enters the world of their chosen film decked out elaborative sets and performers before watching the film. Due to the pandemic, this year’s scheduled immersive experience of Dirty Dancing has been postponed until 2021. However, they recently announced the drive-in experience, which looks to be just as good in terms of entertainment. Staged on a motor circuit, films will include: Moana, The Incredibles, Cars, Mary Poppins Returns, Zootropolis, Toy Story, The Hunger Games, Knives Out, Moulin Rouge, Star Wars, Dirty Dancing, Reservoir Dogs, Pretty Woman, Fight Club and American Psycho.

The first film to be screened will be the fitting racing movie: Rush starring Daniel Brühl, Chris Hemsworth. According to Metro ‘The audience will be introduced to characters Frankie and Johnny Starlight online before the experience, where they will provide tips on costume inspiration and car makeovers.’ Performers will also be involved in the screening and ‘The screenings will also feature a 30-minute performance ahead of the movie, where Frankie and Johnny will broadcast live to the cars via portable JBL speakers.’

Spectator Life reported, that The Drive in company will be attempting to recreate 1950’s America, with all the benefits of 2020 technology. Sound can be accessed automatically via the car radio, food and drink can be ordered on an app and delivered by social-distance trained staff. ‘Visibility is also not limited, important thanks to some 11am showtimes, as the screen is LED.’ The bonus, is that hardworking National Health Service staff and Careworkers will receive free tickets. Shows include Back to the Future, Dirty Dancing, Bad Boys, Get Out, 1917 and Grease.

According to the BBC, newer businesses are emerging and launching this new trend. Couple, Ian and Roseanne Marriott, recently invested £25,000 to launch Drive In Films. Talking to the BBC, Ian, with experience in the broadcast and entertainment industry said, “I got furloughed from the work that I normally do and we thought, what else could I do to support the family? We thought it fits with my skill-set and my background to do drive-in movie theatres. So we set up and it’s gone from an idea to being real very quickly.”

Hopefully, this is a trend that will quickly take off, as entertainment venues are still closed, the UK can safely participate in its much-loved outdoor events over the summer, in a new, yet nostalgic way whilst supporting the threatened entertainment industry.

The UK’s Symbols of Slavery Are Being Torn Down

Coping With Anxiety When Leaving The Home
Scroll to top