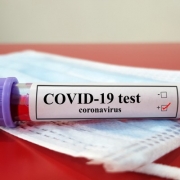 Coronavirus has struck nearly every country and territory across the world and so far there has not been any medical advances to help the fight against it.

However it seems a Swiss pharmaceutical company has been able to create an antibody test that is 100 per cent accurate.

Public Health England (PHE) carried out their own independent testing of the blood test and has confirmed that the test was 100% successful.

The serology test has been developed by Roche and was found to be “highly specific”. The blood test determines whether a patient is suffering from covid-19 as well as if they have developed antibodies against the virus.

It is believed that if antibodies have been created it is possible to determine if the patient has built immunity against coronavirus.

The national co-ordinator of the UK Coronavirus Testing Programme, Professor John Newton, confirms, “This is a very positive development because such a highly specific antibody test is a very reliable marker of past infection. This in turn may indicate some immunity to future infection although the extent to which the presence of antibodies indicates immunity remains unclear.”

Edward Argar, the UK’s junior health minister, agrees that the news “has the potential to be a game changer. We are now moving as fast as we can to discuss with Roche purchasing of those but I can’t give you an exact date when we’ll be able to start rolling them out.”

Meanwhile, the country’s Department of Health and Social Care (DHSC) spokeswoman said, “Antibody testing is an important part of our strategy to counter the spread of covid-19 and to help us understand who has had the disease.

“In addition to the recent huge expansion of the UK’s swab-based coronavirus testing capacity, we are exploring the use of antibody testing across the NHS (National Health Service) and ultimately the wider public.

“We are delighted that devices are progressing through validation, and are actively working on our plans for rolling out antibody testing and will make announcements in due course.”

Prime Minister Boris Johnson had already said in March, “The great thing about having a test to see whether you’ve had it enough, is suddenly a green light goes on above your head and you can go back to work safe and confident in the knowledge that you are most unlikely to get it again.

Chief executive of Roche Group, Dr Severin Schwan, said, “Thanks to the enormous efforts of our dedicated colleagues we are now able to deliver a high-quality antibody test in high quantities, so we can support healthcare systems around the world with an important tool to better manage the covid-19 health crisis.”

Matt Hancock, Health Secretary for the UK confirmed the government were in discussions with Roche about a “very large-scale roll-out” of antibody testing.

However he also recognized that the UK had already had issues with antibody testing, including the ordering of over 17.5 million home testing kits, none of which actually worked.

“There has been false hope before in antibody testing and so we’ll make announcements when we’re absolutely ready.”

It is also worth noting that the US Food and Drug Administration (FDA) have given emergency approval to the antibody test.

But why is an antibody test so important? When someone becomes infected with a virus their body will make specific proteins – antibodies – that in turn will fight the infection.

However, once the infection has left the patient the antibodies remain in the blood system for several months, and in some cases years. The test will be able to tell if a patient has covid-19, has recovered or even not been aware they had the virus which could help many countries take their first steps to restart their flagging economies.

At the moment testing has only been able to detect if someone has the virus at the time of testing so many governments have celebrated this further development.

It is also believed that if the testing is widely introduced the data collected could be used to put plans in place for any further outbreaks of potential pandemics, as well as to create treatments and vaccines.

More importantly, the results will give a clearer indication as to how many cases of coronavirus were actually confirmed, therefore indicating just how widespread the virus has become.

Although there have been claims that if you have recovered from covid-19 you will automatically have immunity scientists have been quick to deny this, saying that it is too soon to confirm anything.

This is not the first test that has been produced however previous tests were not 100% accurate as they were able to locate antibodies for other viruses – including the common cold – which provided testers with a false positive.