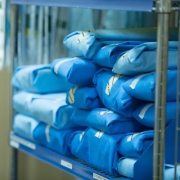 In the UK, a shipment of 400,000 surgical gowns bought for National Health Service (NHS) frontline staff and hailed by government ministers as the answer to the country’s personal protective equipment (PPE) issues has been deemed unusable.

The gowns, flown into the UK from Turkey by the Royal Air Force, were expected to help meet the NHS demand for PPE, with reports stating that supply was quickly running out. However, the new gowns have not passed safety regulations and not a single one will be used by NHS workers.

“If equipment does not meet our specifications or pass our quality assurance processes it is not distributed to the front line,” a spokesperson for the UK’s Department of Health and Social Care told CNN, having been asked whether or not the aforementioned shipment had indeed failed to meet UK safety standards.

“All deliveries of PPE are checked to ensure the equipment meets the safety and quality standards our frontline staff need,” the Department of Health and Social Care added. “This is a global pandemic with many countries procuring PPE, leading to shortages around the world, not just the UK.

“We are working night and day to source PPE internationally and domestically and brought together the NHS, industry and the armed forces to create a comprehensive PPE distribution network to deliver critical supplies to the frontline.”

Last Thursday saw a spokesman claiming that the UK will be swiftly seeking a refund from the Turkish company if no suitable replacement shipment is forthcoming. However, Turkish officials have claimed that they have seen no complaint or refund request in regard to a company from their country.

“So far nobody approached us or claimed for anything from any company in Turkey,” a Turkish diplomatic source told the Guardian, before adding that the country was trying to figure out what the exact issue is.

Private Turkish manufacturer Selegna is the supplier for the goods and have claimed they have received no contact regarding issues with the gowns. The firm was started just a few months ago, originally in the fashion sector but since the outbreak of coronavirus have turned their attentions to medical equipment.

“The fabric of the aprons is certified. All products are certified. If there was a problem, they could do research and let us know,” Mehmet Düzen, spokesman for Selegna told the BBC. “We stand ready to rectify any problems.”

Questions are now being asked of those in power who last month hailed the deal for the gowns as something that will go a long way to solving the PPE shortage in the country. Cabinet Office Minister Michael Gove praised the move on various TV shows following the announcement and fellow Conservative politician Simon Clarke claimed that the shipment from Turkey was one of the main reasons the UK could meet PPE demand.

“Supply in some areas, particularly gowns and certain types of masks and aprons, is in short supply at the moment, and that must be an extremely anxious time for people working on the frontline,” Housing Minister Robert Jenrick said on the April 18, while unveiling the “very significant” order from a Turkish company.

“We’ve had three flights with gowns from Turkey — because we know that every single one of those items of PPE is needed by those working so hard on the front line,” First Secretary of State Dominic Raab also said during the government’s daily coronavirus briefing towards the end of April.

The failed PPE order from Turkey is just the latest on a long line of mishaps by the UK government since the outbreak of the coronavirus pandemic. At the beginning of March, millions of antibody tests were ordered but after being branded as a ‘gamechanger’ by Prime Minister Boris Johnson, it was soon discovered that they did not work and could not be used.

Over the last month or so, government officials have been talking about, and working towards, a self-imposed target of conducting 100,000 tests daily by the end of April. That figure was indeed reached and surpassed, but after just two days fell back below the target line and less than a week later fell below 70,000. It has now been revealed that the figure was only reached because of thousands of tests that were distributed to homes a couple of days before the deadline.

This week has also seen the UK surpass Italy’s coronavirus-related death total to become the country in Europe with the most, with only the USA having higher worldwide.

“This illustrates the danger of making promises on a wing and a prayer. We have warned repeatedly that setting big targets which are then not met and saying all will be well, when at the sharp end of care it is manifestly not, undermines confidence among clinical staff on the frontline,” chief executive of the NHS confederation, Niall Dickson, said.

The UK’s 75th Victory in Europe Day in Isolation