Blog - Latest News
You are here: Home / Around The Web / Health / UK Past Peak of Coronavirus Crisis, Per PM Johnson 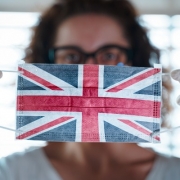 Speaking at his first daily press conference since being admitted into hospital with Covid-19, UK Prime Minister Boris Johnson has said that the country is ‘past the peak’ of the virus outbreak. The Conservative leader, now fully recovered, also stated that he and his team are devising plans to get the economy restarted.

The PM also expressed a desire to set into motion the reopening of schools and public transport to facilitate the country’s return to work. However, the 55-year-old stressed that caution must be maintained in order to minimize risk of a second spike.

Additionally, the Government has announced that five tests must be passed before they can allow restrictions on movement to ease. The tests are: making sure the National Health Service (NHS) can cope, maintaining a “sustained and consistent” fall in the daily death rate, rate of infection decreasing to “manageable levels”, ensuring supply of tests and PPE can meet future demand and being confident any adjustments would not risk a second peak “that overwhelms the NHS”.

“Across this country, therefore, families every day are continuing to lose loved ones before their time. We grieve for them and with them. But, as we grieve, we are strengthened in our resolve to defeat this virus, to get this whole country back to health, back on its feet,” Prime Minister Boris Johnson told the country.

“And we’re determined, urgently and in particular, to overcome those challenges that in the last few weeks have been so naughty and so infuriating. I’m not going to minimize the logistical problems we have faced in getting the right protective gear to the right people at the right time, both in the NHS and in care homes, or the frustrations that we’ve experienced in expanding the numbers of tests,” Johnson continued.

“But what I can tell you is that everyone responsible for tackling these problems, whether in government, or the NHS, or Public Health England, local authorities, we are throwing everything at it, heart and soul, night and day to get it right. And we will get it right. And we’re making huge progress.”

The weekend of the 25th of April saw rising concerns that the worst of the pandemic was yet to come, as the death toll rose by 6,000 in just a matter of days. However, it has since been realised that the figures were inflated by the retrospective inclusion of deaths in facilities such as care homes, where people have been hit the hardest.

Indeed, there is now a decrease in fatalities per day when calculated by date of death and trends in hospitals suggest that the peak for the general population was actually on April 8, per the BBC. However, care homes and other vulnerable institutions continue to be horrifically affected by the virus and care needs to be taken to ensure this improves soon.

“I will not underrate the work and the achievement of those who are dealing with global shortages in a global pandemic. They are rising to a challenge we have never seen in our lifetimes. And the same can be said of the entire people of this country staying in in forced confinement, not seeing family, not seeing friends or grandchildren, worrying about their jobs and the future. And so, my message to everyone again today is, your effort and your sacrifice is working and has been proved to work,” Johnson said.

“I can confirm today that, for the first time, we are past the peak of this disease,” Johnson told the press and public on the 30th April. “We’re past the peak and we’re on the downward slope. And we have so many reasons to be hopeful for the long term.

“The U.K. is leading international efforts to find a vaccine. Today, Oxford University has announced a partnership with AstraZeneca to develop what they believe could soon be a means of inoculating ourselves against this disease. But, until this day comes, and I’m afraid we cannot say exactly when it may be, we’re going to have to beat this disease by our growing resolve and ingenuity.

“And, in short, how we can continue to suppress the disease and, at the same time, restart the economy. A huge amount of work has been going on for that plan. And, of course, as we produce it, we are being guided by the science. And we will try to build the maximum political consensus as we produce it across all parties and across the U.K.”