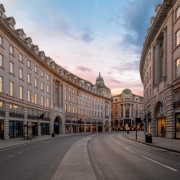 The recent localized lockdowns across the UK has fueled concerns that a second national lockdown may be implemented in the upcoming weeks. With these concerns shares in the travel industry, including hotel groups and airlines, as well as pub companies, have slumped.

Thanks to British prime minister Boris Johnson confirming he is considering whether a short-term closure of bars and restaurants, as well as further restrictions on travel – so called ‘circuit break’ restrictions – would help stop a second wave of coronavirus taking over the country, the FTSE100 has seen a lot of negative action.

British Airways owners International Airlines Group saw their shares go down 10% while local ‘cheap thrills’ airline easyJet saw a drop of almost 7%. It is not just the airline companies that have seen a drop, Rolls-Royce who makes aircraft engines has also seen a drop of 5%.

Airline industries across the world have been struggling to cope with the closures of airports, cities and countries as the world attempts to abolish the coronavirus, with many employees now out of work. And with airports closed many hospitality industries have been affected too. British bar chain JD Wetherspoons, who is popular among students and those looking for a cheap night out, is in the majority of the UK’s main airports as well as on most high streets and has seen a loss of 3% while Mitchells & Butlers, another bar company with bars in every city and town, seeing a loss of 5%.

The hospitality sector has issued what they believe will be the prospect not just for airport bars but also for clubs and restaurants across the country. Many are still struggling to recover after the UK was put into lockdown on March 23 2020 and a second lockdown could see many more companies close for good.

Currently Johnson is looking to implement localized lockdowns and has just issued a statement announcing that areas in the north east of the country have been placed into lockdown, with citizens not only unable to travel or visit their local for a drink, but not being able to mix with others from another household either.

However the chief executive of the Night Time Industries Association Michael Kill believes that if travel and hospitality sectors are closed again it could backfire on the government significantly saying:

“Curfews are devastating for our sector. We are concerned about the narrative around hospitality being at partial blame for what’s going on. There have been schools and universities going back, illegal parties, households, that have all contributed to this in different ways.

“If we end at 10pm in the evening, we’ll end up with people looking for those additional hours, whether it’s an illegal event or continuing the party at a household.”

Many of those in the industries are concerned that if they are forced to close, and potentially at short notice – many of the UK government’s restrictions are announced later in the evening and take effect the following day – the lack of financial support could see their bars or travel companies close forever.

Spokesman for the Forum of British Pubs Dave Mountford is one of those who believe the industry would be devastated. Not only would companies be unable to get some much needed cash flow into their accounts they would also have stock that they would not be able to use, with many remembering how much stock such as food had to be destroyed during the first lockdown.

Mountford says, “Unless we know there’s a package in place to support us, this is going to be quite devastating and I don’t envisage a lot of pubs reopening.”

The UK had implemented a successful ‘Eat Out To Help Out’ scheme throughout August were diners could eat out and pay only 50% of their meal, the rest coming from the government. While the government confirmed that the 64 million who took advantage of this scheme – not just locally but also traveling to coastal and holiday locations around the UK – had ploughed much needed money into the economy, the weeks after the scheme finished saw the number of coronavirus cases increase dramatically, leaving many wondering if the scheme had actually backfired.

If the UK government were to implement a second lockdown the possibility of international travel would be stalled again before it even had a chance to take off properly. With the UK changing travel rules regularly, often leaving many stranded overseas as they demand they come home after removing the country of choice from their ‘safe list’, travel companies are finding it increasingly hard to put together plans for rebooking passengers who lost holidays earlier in the year.

Joshua Mahony is a senior market analyst and believes that “from a tourism perspective, the rise in Covid cases in the UK does little to help boost sentiment around travel stocks. While we have become accustomed to the UK imposing quarantine restrictions on visitors from specific countries, the prospect of quarantines on UK tourists holidaying abroad would put a major stake in the heart of the travel industry.

“With the growing likeliness of quarantine restrictions being imposed on UK visitors, it comes as no surprise to see the likes of IAG, easyJet, Carnival, Rolls-Royce, and InterContinental Hotels Group heading up the FTSE 350 losers.”