Blog - Latest News
You are here: Home / Around The Web / Lifestyle / Understanding Boredom 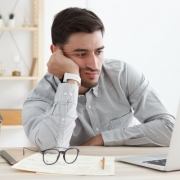 Although much of the world is emerging from lockdown, it may still take some time before life gets completely back to normal. If you are trying to find ways to fill your time, no doubt boredom has set in once, or twice, or more. There are only so many evenings you can spend watching Netflix, even for the marathon binger. It gets to that frustrating point when you are trapped in an inability to find anything that interests you, and unable to break away from that cycle.

Boredom is a common feeling, often it is associated with laziness, but does not necessarily have anything to do with being lazy. Although boredom is subjective and affects people in different ways, often, you can feel bored when you are energetic and unable to find a sufficient outlet, if you are distracted from a certain task, or simply feeling unsatisfied and uninterested in a certain activity. Boredom manifests as a sense of frustration and emptiness, you may even feel fatigued, apathetic, nervous or jittery, according to Healthline.

One: INDIFFERENT
Indifferent boredom is a low state of arousal, where the person becomes withdrawn, often creating a feeling of relaxation and calm. Some argue that this can actually be a positive state of boredom, leading to feelings of happiness and even creativity as the mind enters a more neutral state and not frustrated or flustered at the boredom.

Two: CALIBRATING
This second type of boredom is a higher state of arousal and more negative emotions. In this state, a person may want to do something but do not know what, making it a rather unpleasant situation. ‘Wandering thoughts’ characterize this state without settling on an alternative activity to combat the boredom.

Three: SEARCHING
This state of boredom is more active than the last, where the person actively searches for an alternative activity. People in this state are normally more emotionally aroused and as they think of particular hobbies or activities that they could do, it can become quite negative and restless state.

4: REACTANT
A boredom that is often found at work or school and can cause the highest level of arousal and negative emotions. In this frustrating state, a person will want to escape a boring situation that they are placed in. Manifesting in significant restlessness and agitation, a person will think about specific ‘highly valued’ alternative situations.

5: APATHETIC
The fifth and final state, which came along years after the others was apparently a surprise to researchers. It is a significant lack of emotion, positive or negative, much like depression. It was commonly seen in settings such as the office or school, again where people have limited control. This type of boredom was seen as one of the most destructive.

The feeling can also be a bi-product of other problems in your daily life, such as: ‘inadequate rest or nutrition, low levels of mental stimulation, lack of choice or control over your daily activities, lack of diversified recreational interests and poor perception of time,’ Healthline defines. Boredom can often be related to depression, especially if you are also feeling hopeless, sad, chastising yourself for boredom and ‘evading opportunities for stimulation’. Boredom can also easily be spotted in children or adolescents and parents may try to find effective ways of alleviating that boredom.

Psychology Today’s article on boredom in 2017, stated that ‘Existing survey estimates show that between 30 percent and 90 percent of American adults experience boredom at some point in their daily lives, as do 91 percent to 98 percent of youth (Chin et al., 2017). Men are generally more bored than women.’ It argued that boredom is ‘similar to mental fatigue caused by repetition and lack of interest in the details of our tasks (such as tasks that require continuous attention, waiting at the airport, prisoners locked in cells). Any experience that is predictable and repetitive becomes boring. In general, too much of the same thing and too little stimulation can cause in its victim an absence of desire and a feeling of entrapment (Toohey, 2012).’

Psychology Today went on to identify that some of the causes for boredom could include: a ‘lack of flow’ or immersion in tasks at hand, a need for variety, lack of attention – which may deeply affect those with attention disorders, a lack of understanding what you enjoy or makes you happy. If you can begin to identify the different ways in which you are bored, you may be able to effectively tackle it or even more simply, accept it as a passing state.