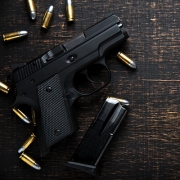 Guns without serial numbers, built at home, are increasingly becoming the weapon of choice for criminals in California, experts say, and there’s not much law enforcement can do to stop the trend.

Called ghost guns, the weapons are impossible to trace.

On Thursday, sheriff’s homicide detectives confirmed suspicions that the weapon used in the shooting at Saugus High School on Nov. 14 was a ghost gun.

After his mother dropped him off at the campus, 16-year-old Nathan Berhow pulled the .45 caliber pistol from his backpack and opened fire, killing two students, wounding another three, then killing himself.

Detectives don’t know yet where Berhow got the gun. Numerous weapons, apparently belonging to Berhow’s father who died two years ago, were seized from the home. Some of those were unregistered, sheriffs officials said.

Whether Berhow found the gun at home or bought the parts himself, the shooting is exactly what law enforcement officers across the nation want to avoid: people who are not supposed to have guns obtaining them with ease.

“Our entire system is built around those who can have firearms and those who can’t,” said Nick Suplina, a former special counsel to the New York Attorney General’s Office.

Since ghost guns can be put together or bought by anyone, some gun companies market the unfinished receivers for hobbyists.

With the right equipment, they can be machined out of metal; with a 3D printer, they could be constructed using streams of plastic.

Increasingly, guns without serial numbers are showing up at crime scenes.

In August, a convicted felon armed with an unregistered AR-15 rifle killed CHP Officer Andre Moye Jr. and wounded two other officers in a shootout on the 215 freeway following a traffic stop.

In 2013, 23-year-old John Zawahri killed five people and injured two others in a rampage at Santa Monica College using a homemade AR-15.

“This is a common trend ATF is seeing in SoCal amongst gangs — criminals building their own guns since they are prohibited from buying guns legally,” said Bill McMullen, the special agent in charge of the ATF’s L.A. office, at the time of the arrests.

Gang members and convicted felons have been making money off these operations for years.

Suplina, now the managing director for law and policy at Everytown for Gun Safety, was with the N.Y. attorney general’s office in 2015 when officials broke up a weapons manufacturing operation in one of the first criminal prosecutions of an unlicensed gun maker.

“We uncovered a gun trafficking operation, someone making and selling these guns on the black market,” Suplina said. “The maker and seller was himself a convicted felon.”

State lawmakers have since attempted to close the unfinished receiver loophole. California legislators passed rules in 2016 requiring anyone planning to build a weapon at home to register the gun with the state Department of Justice.

Assemblymember Mike Gipson of Carson wrote the bill. The Saugus High School shooting shows exactly why the new rules are necessary, he said on Thursday, a week after the tragedy.

“(Ghost guns) are appearing more and more frequently, and with devastating consequences,” he said.

But Mark Tallman, a professor at Colorado State University-Pueblo with a forthcoming book specifically on ghost guns, expects enforcement of the new law to be difficult, with California increasingly known to be home to firearms assembled and used by criminals, at least, anecdotally.

“I had a strong suspicion that the Saugus case fit the profile of somebody who might use a ghost gun,” he said, noting the shooter’s age and other presumed roadblocks to obtaining a gun legally.