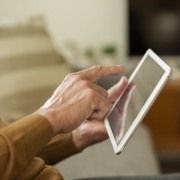 One of the most heartbreaking aspects of COVID19, is the inability to support family members and friends suffering from coronavirus when they are receiving treatment in hospital. This could be one of the loneliest times of their life, to be suffering from a virus that currently has no direct solution. Many forms of technology have made revolutionary changes to the world, but the simple act of communication is the greatest gift technology can give patients right now. In many destinations around the world, such as New York, Paris and London, cities are requesting citizens with unused iPads to donate them to charities to delegate to hospital’s to make communication a little easier.

In deprived communities where technology is not easily accessible, having donations from those who are lucky enough to have technology that is not needed could make a significant change to patient’s experience. One group of volunteers from New York have made it their mission to source unused iPads to virtually connect people due to the hospital restrictions on visitors. As Nicholas Heller, a documentary maker tells Fox News“It’s a heart breaking visual” referring to the many that have died from the virus whilst in isolation without the comfort of loved ones.

Ipadforhospitals.org is an organization founded by two medical students, Amy Johnson and Jeff Arace in New York City have launched a website to donate unwanted iPads in the easiest way possible. The pair of medical students are from SUNY Downstate in Brooklyn. The charity aims to give these technology donations to those patients that do not have a smart phone with video calling capability. The organization is operating daily pick-ups around the city or citizens have the opportunity to post their unwanted goods. They are also taking financial donations to which the money raised from this will be used to purchase refurbished goods.

Even though the main mission of this call out is to connect families, the donation of iPads has other positives. It will allow hospital staff to connect with patients without being in the room, helping hospitals that have a lack of personal protection equipment. This will decrease the hospital employee’s exposure to the virus preventing the spread of the disease.

Ian Kaplan tells Fox News”Part of why this project has captured the hearts and minds of the people involved is that it feels like a challenge that is resolvable”. The chance for citizens to make an impact in one small step could change the lives of sufferers of coronavirus.

To date, the charity has seen successful results from the launch. It has received 375 iPads and $22,000 raised through it’s Go Fund page. Brooklyn’s hospitals are some of the first to have received this help, however many more are needed to combat the number of patients not having the chance to connect.

This need is not only in New York City; London and Paris are both suffering with an overwhelming number of patients with the inability to connect. CitzenM a hotel business with hotels in Paris and London have made their impact by donating iPads to hospitals in both cities. They have donated almost 800 unused tablets and these are now being distributed to those with COVID-19 including children who are separated from their parents, elderly people and those who are suffering the worst, due to having severe illnesses prior to the virus.

Robin Chadha, Chief Marketing Officer of CitizenM explains to the Telegraph“It is more important than ever to stay strong together, and yet the current circumstances don’t allow us to do so freely. In that spirit, we hope this small act will help some of our local communities stay connected with their loved ones during these strange and unprecedented times.”

In London, the iPads have been collected by NHS representatives and distributed to hospitals such as Kings College Hospital, North Middlesex University Hosptial and Royal Brompton and Harefield. In Paris, to name a small number of places the tablets have been distributed: Hopital Avicenne, La Roseraie elderly home and Hôpital Bichat.

The technology can provide entertainment, games and education to keep users assumed. A glimpse of positivity during this outbreak can lift morale and keep patients looking forward to a bright future. Similarly, to the US, the UK and Paris have restricted visits to hospitals until further information is revealed by the government.

In London and Paris, this technology would normally be used to operate hotel lighting and televisions, however they are being distributed to emergency services workers to help collect vital information about patients whilst on emergency calls.

With the current state of uncertainty and citizens around the world feeling helpless whilst self-isolating, a simple act through technology can lift morale and give founders of charities like iPadsforHospitals a sense of purpose and reward knowing they are giving their best effort to help many nations combat this global pandemic.

This Journalist Is Virtually Sharing Her Family’s Farm With The World...
Scroll to top