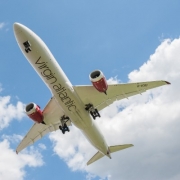 Billionaire Richard Branson’s Virgin Atlantic looks to be holding on by the skin of its teeth as a £1.2bn rescue detail has been announced.

In reports by Sky News, the company which is officially called Virgin Atlantic Airways, is now finalising a rescue package that is predicted to save thousands of jobs within the aviation sector. Given the recent news that around 125,000 jobs within the aviation sector could be lost within months due to the devastating impact of the coronavirus pandemic on the travel sector, this will no doubt provide a glimmer of hope in what is otherwise an extremely bleak outlook.

It has been known for some time that Virgin Atlantic was in trouble, and Sir Richard Branson himself wrote an open letter to Virgin Atlantic employees in which he revealed that he was asking the UK government for a commercial loan of £500 million to help keep the company afloat. There were also suggestions that he was seeking out a buyer for the company although specific details or timescales for any potential sale were not disclosed.

Virgin Atlantic is majority-owned by Branson’s Virgin Group and the latest revelations indicate that the company has now been able to secure the backing of ‘key financial stakeholders’ in a deal which utilizes a newly introduced UK court-sanction process designed to help make corporate restructurings smoother during the coronavirus pandemic. The refinancing will include a contribution of £200m from Virgin Group and a £170m loan from hedge fund Davidson Kempner. Further wiggle room has been gained from the deferral of around £400m of fees owed to Virgin Group and Delta Air Lines and a combination of advances and deferrals from payment companies and aircraft lessors, totaling ‘hundreds of millions of pounds’.

It is clear from the strong connections between Virgin Atlantic and Virgin Group, coupled with other stakeholders suggested that finding a way forward was preferable to failure, but they were reportedly being held back by First Data, a subsidiary of Nasdaq-listed company Fiserv. They were holding firm with their demands for cash collateral, but it is believed that they have now relented. This reprieve has enabled Virgin Atlantic to progress with their proposed recovery plan, which would at least give them some time to figure out a viable way to trade through what is proving to be an incredibly difficult year for the travel sector.

The aviation industry has already received its fair share of blows, with the first coming from the demise of Europe’s largest regional airline, Flybe, in March. At the time, this was seen as devastating news for domestic travelers, who relied on the airline for travel across the UK for work and family commitments. Some journeys which would have taken just a couple of hours by plane were suddenly made completely nonviable, with travelers facing either hours of driving, or extortionate train prices and multiple connections.

Most recently, as the government’s 100% furlough schemes came to an end, a further wave of redundancies was announced, with EasyJet announcing that over 700 pilots jobs were at risk and substantial job losses also expected at British Airways and Ryan Air.

Whilst the economy is slowly starting to reopen and find a new way to move forward despite the continued prevalence of novel coronavirus, there are many uncertainties that lie ahead which are undoubtedly putting blocks on the usual requests for additional financing. The real risk of a bigger and far deadlier second wave remains in the background although governments are trying to avoid focusing on this too heavily, as it would simply scare people into staying indoors which would well and truly cripple an already broken economy. Some of the biggest businesses and brands are in real trouble and whilst there is a strong argument for providing the financial capabilities to continue trading and therefore keep thousands of people in employment, this can only be done when there is a clear and certain future which sees those funds being returned or at the very least reduced over time. Sadly, the devastating impact of COVID-19 means that travel restrictions can be reduced and reimposed at a moment’s notice and airlines simply do not have a clear forecast of what their future business will look like, at least not with the certainty needed by those in charge of parting with the cash.

It’s also worth remembering that many of these investors and stakeholders in large companies are using other people’s money, in the form of bonds, stocks and shares investments and pension funds. Fund managers have a duty to manage their clients funds in a responsible way, and pumping money into a commercial machine which shows no evidence of being able to come out the other side would have far reaching impacts that go way beyond the immediate loss of jobs. What is clear is that even with any cash injections, airlines are going to find the next 12 months incredibly difficult and some will simply not survive. Who stays and who goes remains to be seen.

HAL Reduces Number of Ships In Their Fleet

60-Year Old Grandfather Reflects On Being The Oldest Swimmer To Complete ‘Oceans...
Scroll to top