Blog - Latest News
You are here: Home / Around The Web / Sports / What Is Being Done To Encourage More Women Into Golf? 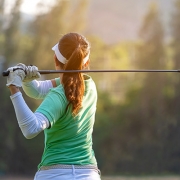 Figures suggest that there are around 37 million latent female golfers around the world, who could be worth billions to the sporting industry, $35 billion to be precise! That said only 20% of active golfers worldwide are female.

In recent years, the golf industry has worked hard to become a more inclusive sport that actively encourages women and girls to participate. In 2017, the R&A merger with the Ladies’ Golf Union was a pinnacle step forward in helping to put women’s golf at the forefront and give it a kudos that had been so poorly lacking over the years. Just a year later, the Women in Golf Charter was launched with the sole objective of bolstering women and girls’ participation and membership in golf, both by reaching out to families who could spend quality leisure time playing golf, or to women looking to build professional careers within the golf industry.

In 2018, Golf Canada became one of the first signatory organizations to align itself with the new Women in Golf Charter. They decided to launch the Women’s Leadership Summit as part of their commitment to the charter. The event helped to inspire and empower women in the workplace whilst also giving back to the community Speaking at the time of the event, Golf Canada’s Mary Beth McKenna said, ‘When we became aware of The Charter, Golf Canada we were proud to be one of the first organizations to sign on and be a part of it. It’s a priority for us to highlight women’s golf, inclusiveness and diversity.’ Golf Canada has continued to honour this commitment, and the 2020 CP Women’s Leadership Summit will take place in Vancouver in September.

In January 2020, The R&A and European Tour announced a newly formed Joint Venture between the Ladies Professional Golf Association (LPGA) and the Ladies European Tour (LET) which was initiated to help significantly grow playing opportunities, financial incentives and media exposure of professional women’s golf, both in Europe and globally. The announcement also revealed that bodies would each have one seat on the new LPGA-LET Joint Venture Board of Directors and that it would be driving forward a vision to build ‘a strong and sustainable Ladies European Tour’.

Despite all of these positive steps, an article written by the BBC in 2019 revealed that the sport ‘has been accused – among other criticisms – of being too white, male, elderly, expensive, time-consuming, and generally out of step in an increasingly inclusive world.’

So what can be done to help encourage more women into the sport? Many have expressed their opinions on this, and suggestions include encouraging more clubs to drop their male-only stance in order to welcome in female players. There has been a drive to recruit more female golf coaches and a pressure on brands to provide more inclusive representations of golfers in their marketing imagery. At a club level, there is work taking place to make the venues more accommodating for women socially, so that they are encouraged to stay after a game or training to socialize, have a drink or stay for lunch.

More specifically, there has also been the introduction of women-only golf courses, to help provide a dedicated environment for female players to develop their skills, make friends and excel at the sport. This is in addition to some clubs now offering a creche so that mothers can also participate in a game of golf or a social event taking place at the club.

Such changes can only be positive and support what is evidently taking place both at the grassroots level and further up the chain. Whilst progress in regards to female management and board-level representation in the sector remains slow, there are steps being made to challenge this and bring more women into the game, as is the case with a number of other sports too.

As always, more can be done and it has been highlighted that a major area of focus should be on the roles within golf which are typically undertaken by males instead of females. These include roles such as greenkeepers, club managers and perhaps most interestingly, golf course architects, of which women make up just a handful.

Bringing women into to the game at all levels can only deliver positive benefits to the golfing industry. From mothers bringing up their children to have a love and appreciation of the sport, through to the potential sponsorship opportunities that open up when the audience has a larger proportion of women, it makes sense culturally, socially and financially. It will certainly be an interesting few years ahead as we see women become more prominent within the game, both center stage and behind the scenes. Tackling a predominantly male sport is not something which can be achieved overnight, so it is likely to be some time before we see the women’s game on an even par.

How to Avoid Couples on Your Solo Vacation