Blog - Latest News
You are here: Home1 / Around The Web2 / Culture3 / When it Comes to Teaching Science, Culture and Language Matter 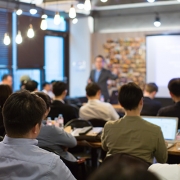 For years, one of the highest-rated comedy series on television was The Big Bang Theory, a show whose central characters portray “old, tired images of the science community, sending a resounding message about who belongs in science,” says Bryan A. Brown, an associate professor of science education at Stanford Graduate School of Education. “These stereotypes have been reinforced for generations. We can’t ignore the barriers these expectations impose.”

Brown’s research examines why cultural stereotypes and language about science matter, especially for students in multilingual and multicultural communities who might not fit the images they see or relate to the words they hear in popular culture and in the classroom.

Brown, a former high school science teacher, has studied science education in urban communities for more than two decades, exploring the relationship between student identity, classroom culture and academic achievement. For the past eight summers, Brown has brought fifth- and sixth-graders from inner-city schools to the Stanford campus for a weeklong science camp, where the students get excited about biology, physics, chemistry and engineering—and learn from teachers of color, who provide critical role models in the field.

In his new book, Science in the City, Brown looks at the role that language and culture play in teaching science and technology. We spoke with him about some of the obstacles young people of color face in the science classroom, and how science teachers can better connect their lessons to students’ cultural identities.