Blog - Latest News
You are here: Home / Around The Web / Science / Why A Second Wave of Coronavirus Could Be Much More Deadly 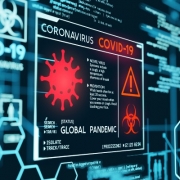 As countries across the world focus their attention on devising the most effective exit strategies from the Coronavirus lockdown, medical experts are warning that easing measures too early will lead to an even more deadly second wave.

Detailed analysis of both infection growth and COVID-19 related deaths have helped to confirm the initial guidance from the health professionals that social distancing will help to stall the growth of the virus in many countries. The ‘golden number’ which is frequently reported is the ‘R’ rate, which ideally needs to be well under 1.0 to remain at manageable levels in communities. This means that every person infected with Coronavirus is likely to go on to infect less than 1 other person.

Whilst the social distancing and hand hygiene approach has been proven to help control the spread of infection, it does not provide a long term strategy for eradicating the virus from communities and we are already seeing numbers rise substantially in countries that have eased their lockdown after seemingly being able to control the initial wave of the virus. Singapore has experienced a significant resurgence in infections since easing its lockdown measures and Germany has recently issued a renewed notice for residents to stay at home after the all important ‘R’ rate appeared to surge from previous levels of 0.7 to 0.95, just under that critical level of 1.0.

With a lack of widespread immunity in the population and a vaccine likely to be a number of months away, there are very real worries that we are likely to see repeated waves of the virus which could have disastrous consequences for both public health and the economy. It has long been said that social distancing can only flatten the curve, it can’t eradicate the virus. It will only be possible to resume normal life once there is an effective and widely available vaccine alongside treatments and interventions for the sickest of patients that ensures they don’t die from the virus. The widely speculated herd immunity theory does have some substance, as this is indeed how we have overcome previous less serious viruses, however as this is a completely new virus, it remains unclear whether people will create sufficient antibodies to prevent reinfection and how long this immunity may actually last. The answers to these vital questions cannot be expedited and will only be realized in time.

The fear that a second wave could be more deadly than the first is based on the analysis of previous pandemic progressions. The 1918 influenza pandemic lasted for 36 months, from January 1918 to December 1920 and ended up killing around 50 million people. It is believed that around a third of the global population at the time were infected with it, equating to around 500 million people. There were four notable waves in the Spanish Flu pandemic, with the second proving to be the most deadly. Part of this was thought to be because the virus had mutated into a much more dangerous strain. The appearance of multiple waves has also been seen in subsequent flu pandemics in 1957, 1968 and including the 2009 H1N1 influenza A pandemic also known as Swine Flu. In the case of Swine Flu, this lasted around 20 months although infected much lower numbers, there were 1.6m confirmed causes and less than 20,000 recorded deaths.

History indicates that the novel coronavirus pandemic is likely to follow a similar trajectory and scientists across the world will be eagerly watching those who are first to ease out of lockdown measures to assess how this virus might progress. The biggest fear is that the virus will mutate to an even deadlier version which affects a greater number of healthier individuals. Research suggests that there are already three different strains of the virus circulating, with other scientists claiming that the virus is constantly mutating in order to overcome immune system resistance in different populations. Other studies in the US found seven different strains prevalent in New York alone, with many more likely to be uncovered as research into the virus continues.

What is clear is that we are set for a long road ahead as the entire world comes together to try and fight the biggest health threat we have faced in over 100 years. Viruses by their very nature are known to find clever ways to adapt and evolve in order to survive and the reality is that we are simply too early in the journey to know how this will pan out over the coming months. Many experts are in agreement that we are likely to see a flexing of lockdown measures in line with infection rate spikes and troughs, meaning that social distancing and restrictions on leisure and social activities are likely to form part of our ‘new normal’ for the foreseeable future.