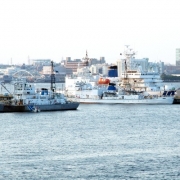 A study released this week has put forth a new theory on why boats containing dead North Korean fishermen keep washing up on the coast of Japan.

For a number of years, Japan’s north coast has been plagued by a dark mystery, with fishing boats being found on shore carrying the bodies of dead North Koreans. Speculation over the phenomena has been rife since it started, with a variety of experts and law enforcement agencies attempting to get to the bottom of this bizarre trend.

One Japanese Coast Guard speculated that it could be a factor as simple as the weather causing the boats to get caught up in heavy storms and drift out further than planned. North Korea’s aging fishing fleet has also been cited as the reason by some.

Numbers of the so called ‘ghost ships’ have risen in recent years, with 2017 in particular seeing a large rise in the number of occurrences. 100 of these boats landed on the Japanese north coast that year, a rise of 50% on 2016’s tally. 35 North Korean bodies were found on board one ship, over 1,000 kilometers (600 miles) from their home country.

A study published on Wednesday seems to have shed new light on the situation, though with a new theory on why the North Korean fishing community are suffering in this way. The study, published by international non-profit organization Global Fishing Watch, blames Chinese ‘dark fishing fleets’.

The authors of the report were able to utilize a variety of satellite technologies in order to analyze northeast Asia’s marine traffic in 2017 and 2018. They found that a large number of Chinese ships were sailing in the waters outside of North Korea. These ships were allegedly fishing there, violating the law, as well as pushing the North Korean fishing fleet away from their own shores and towards and into Russian and Japanese waters.

North Korea’s fishing boats were not designed to travel long distances and so the rough ocean journeys must have caused a large number of deaths of North Korean fish workers, with a proportion of them eventually washing up hundreds of miles away on the north coast of Japan.

Worth over $300 million per year, Pyongyang’s fish trade was sanctioned in 2017 by the United Nations Security Council as the intergovernmental organization set out to punish the Kim Jong Un regime after it repeatedly conducted ballistic missile testing throughout the year.

Global Fishing Watch’s report claimed that this was not stopping Chinese ships, however, as 900 ships were spotted fishing in North Korean water in 2017, as well as 700 the following year. The report predicted that the fleet of Chinese ships most likely caught in excess of 160,000 metric tons of Pacific flying squid over the two years, one of northeast Asia’s most valuable seafood products. The estimated value of such a haul would be over $440 million.

With a considerably less expansive fishing fleet than China, North Korea most likely would not have been able to reach similar levels of fishing production. Nevertheless, Pyongyang attempted to recover some of the losses incurred by the lost catch by selling fishing rights to foreign operators in violation of the UN sanctions. A UN report that was published this March claimed that North Korea earned around $120 million by doing so.

“It is the largest known case of illegal fishing perpetrated by vessels originating from one country operating in another nation’s waters,” said Jaeyoon Park, a senior data scientist at Global Fishing Watch and one of the authors of their study into this phenomena.

According to Jungsam Lee, another of the study’s authors, the vast amount of Chinese fishing ships in close proximity to the North Korean coastline meant that the country’s own fleet were forced further and further away from their homeland in search of their catch. With poor equipment and little travel plans, this soon turned into disaster as boats were cut adrift and North Korean fishermen left to die.

“It is too dangerous for them to work in the same waters as the Chinese trawlers,” Lee said. “That’s why they’re pushed to work in Russian and Japanese waters and that explains why some of North Korea’s damaged vessels showed up on the beaches of Japan.”

“While fishers and their families have watched their incomes plummet, academics are left puzzled over the most likely cause of this decline in catch. Many point to overfishing as the biggest culprit, while some suggest that climate change may be playing a part, with changes in water temperature affecting spawning and migration patterns. It seems to make depressing but all too familiar sense,” Jaeyoon Park continued in the blog post that accompanied the study.