Blog - Latest News
You are here: Home / Around The Web / Culture / Why Non-Binary Emojis Are Essential To Promoting A More Inclusive Soci... 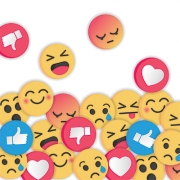 Emojis are commonplace in text messages, chats and have even ventured into business emails as a way to add additional expression to a discussion, sentence or phrase. In a constant effort to become more inclusive, a new batch of emojis have been released which include Mx Claus – a gender neutral Santa Claus, and a man with a mustache wearing a wedding dress. The new release included 117 new graphics and also included a non-binary person holding a child and the transgender flag.

The decision as to which new emojis are created and released is made by a consortium of tech companies called Unicode. The selection of available emojis has long been criticized for leaning towards traditional gender stereotypes and also for not being ethnically diverse. There have been efforts over recent months to inject more diversity into the selection of job roles and also the option to personalize skin tone, but to date the topic of gender fluidity has not been widely represented within the emoji world.

The importance of ensuring equal representation through emojis is more significant than simply adding a greater variety of icon options to use in a message. It allows people to truly feel they are able to express themselves as they are and that they feel represented within the wider community. Subliminally, wanting to express a shocked, sad or happy emoji when the person is non-binary and being forced to choose between a male or female emoji immediately reinforces the notion that they are not an accepted member of the community, that their identity isn’t considered the norm and that they effectively are an outsider. It then becomes a conscious decision to either adopt an emoji which isn’t accurate, or simply not use one at all. Such a small but significant experience repeated over and over can contribute towards feelings of isolation and non-acceptance.

The effects can extend into all aspects of life too, including working life, which is why everyone needs to take action to ensure the world as a whole is more inclusive and accepting of non-binary preferences. Writing for CNN, Kara Alaimo said, ‘Gender is not a concept that should be relevant to most social or professional interactions. But the more that organizations pretend that it is, the more the rest of us may keep performing accordingly. That’s unfair to everyone, no matter how we identify.’ There is also statistical evidence of the value of social affirmation and its effect on reducing levels of depression and suicide in transgender and non binary young people.

There have been a number of reports that US universities are becoming aware of the importance of embracing gender preferences of new students, with the New York Times reporting that Harvard’s School of Government had introduced gender pronoun stickers for use on name placards. This enabled students to immediately show their preferences without being subject to an incorrect analysis of how they look and assumptions which then needed to be corrected publicly, causing further awkwardness, embarrassment or isolation. Many teaching professionals agree that such a small, but significant move can help to improve class relations and enable teachers to engage with students in the way they most prefer from the onset.

Businesses also recognize the need to follow suit. With reports suggesting that millennial’s now make up a third of the workforce, and that of these, as many at 12% identify as transgender or gender non-conforming, it is becoming increasingly important that organizations fully understand their responsibilities when it comes to recruitment and ongoing employee welfare. Organizations which have been around for many years or have a large proportion of older employees may find that more work needs to be done to education and change the very culture, so that people understand what actions, words or behaviors may isolate or negatively affect these particular employees. Gender fluidity is a relatively new concept and so there is still much work to be done to ensure that it is fully embraced in the working world, and much like the fights for equal opportunities for women and BEM employees, that everyone is given the same opportunities to contribute, to thrive and to succeed.

So let’s take this discussion back to non-binary emojis. Yes, this may seem like a fairly insignificant factor in the very complex makeup of society, but in a world driven by smartphones and digitalization, their use is something which is so ingrained in our everyday lives that it holds a unique power to change perceptions and to set precedents from a young age. Normalizing the notion of non-binary gender is essential in creating a more inclusive and welcoming society, and there is no doubt that emojis can do their part in helping to break down barriers when it comes to embracing the many variations associated with gender identity.