Blog - Latest News
You are here: Home / Around The Web / Business / Why Private Prisons Are Still Big Business During Economy Struggle 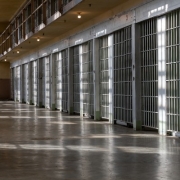 Economies around the world are continuing to struggle following the fallout from the current coronavirus pandemic, but that is not the case everywhere.

In America’s jails, prisoners are continuing to work on little or no pay, making sure there is enough hand sanitizer and facemasks for American citizens to stay safe across the country.

Alongside this commitment, many of the detainees have had family visits revoked – some states for many weeks – due to fears of covid-19 being contracted inside the prisons. However, if they wish to contact their family a 15 minute telephone call can cost around $25, which does not include the surcharge they receive each time they add credit.

While this can be tough on the prisoners the businesses that are working within the prisons are continuing to make money.

One prisoner’s relative commented, “You have to pay for phone calls, emails, food. Everything. It’s hard. Especially at a time like this, when you’re out of work, you’re waiting for unemployment… and you don’t have money to send.”

With little news in the press other than coronavirus, it was clear the way our prisons are handling the crisis would come to light. Currently there are over 2.3 million people in prisons across the country and with hand sanitizer and masks rarely provided an outbreak of covid-19 seems to be on its way.

Alongside the poor sanitary conditions, testing for the virus is seldom carried out with many residents living in local proximity to such centers worried for their own health too. If you do become ill or display any symptoms you are moved to separate buildings – usually with little or no ventilation and with high temperatures.

It is not uncommon for prison dorms to house up to 50 prisoners at a time, meaning prisoners are concerned about how those in charge would cope if covid-19 made its way into the center, with one prisoner commenting, “I’m afraid they’ll just let us die in here”.

While the health of our prisoners may not be the first priority to some citizens it is worth remembering that as well as hand sanitizers and masks, they also make license plates, mattress and body armor vests as well as many other items we use in everyday life. Some even work outside of their facilities, including in California where some work as firefighters.

It is not uncommon for the companies who run private prisons to refuse to pay for certain healthcare, with reports that a prisoner in Parchman Penitentiary in Mississippi had his heart medication request refused. “Even though that wasn’t life threatening, it was serious. With covid-19, I could actually lose my life.”

According to Covid-19 Behind Bars Data Project, a project run by UCLA Law, there have been over 20,000 confirmed cases of coronavirus amongst prisoners nationwide, with 295 fatalities. However these figures have not been confirmed by any authorities, in fact the first fatality of a prisoner was only announced this week by San Diego officials.

Many businesses saw the prison sector as good investments during the 1980s and 1990s when the numbers of those incarcerated rose dramatically. Typically offering lower costs to the state as well as profit-sharing agreements, administrators began the process of making specific areas privatized, including the catering divisions, cleaning divisions and in some cases the complete control of the center.

While it is believed that running prisons at a profit is more financially viable for a private company rather than the government – for instance, living conditions should be improved in many private facilities while improved rehabilitation programs has also been cited as proof of their success – many disagree with the idea of prisons for profit.

Those against privatisation were able to stop nine major banks, such as Bank of America and J.P. Morgan, from offering loans to private prisons. Currently around $80 billion is spent each year in America and although it is split between the private and public sectors – the public sector pays for salaries as well as a portion of health care fees – there are many companies who are trying to get their slice of the budget.

A recent report from Worth Rises shows that there are more than 4,100 businesses that are in some way profiteering from the penal sector, a figure that the company believes should be vastly reduced. They have also identified over 180 publicly traded corporations or investment companies who they believe are a danger to not just the prisoners, but the wider community too.

Worth Rises’ founder and director Bianca Tylek said, “The industry behind mass incarceration is bigger than many appreciate. So is the harm they cause and the power they wield. They exploit and abuse people with devastating consequences.”

“Of course they aren’t unilaterally responsible for mass incarceration, but they’re part of the ecosystem propping it up.”

The Reality of Office Culture Due to COVID19
Scroll to top