Blog - Latest News
You are here: Home1 / Around The Web2 / Real Estate3 / Wine Cave Couple Made their Wealth in Real Estate 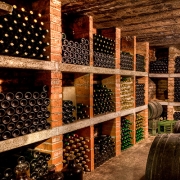 The wealthy couple behind the infamous “wine cave” fundraiser for Pete Buttigieg that fueled sound bites during Thursday’s Democratic debate made their money in real estate.

The cave at Hall Wines in California’s Napa Valley is owned by Dallas residents Craig Hall and Kathryn Walt Hall. Their company, Hall Group, owns Hall Park, a 162-acre office complex about 25 miles north of Dallas, and other properties.

The Dec. 15 fundraiser, billed as “An Evening in the Vineyards with Mayor Pete,” cost donors $1,000 for a photograph with Mayor Pete and $2,800 for a dinner served from a wood-and-onyx banquet table beneath a chandelier made with 1,500 Swarovski crystals.

The opulent setting prompted a fiery clash between Sen. Elizabeth Warren (D-MA) and Buttigieg, the mayor of South Bend, Indiana, during last week’s debate. Snippets of the exchange were featured on TV over the weekend.

Decade in Review: What the Smartphone Has Wrought
Scroll to top