Blog - Latest News
You are here: Home1 / Around The Web2 / Science3 / Young Girls Learn And Laugh With Science 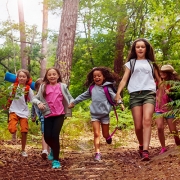 The girls’ laughter and excitement filled the room as they drew out their ideas on the tables.

They were envisioning how their catapults should look and how they would transport the little Lego people from one side of the room to the other.

The Tonica Girl Scouts, ages 9-11, brainstormed with one another how to use the popsicle sticks, rubber bands and plastic spoons to their advantage.

Nicole Fundell grew up as a Girl Scout, and she remembers camping and going to summer camp. But she doesn’t remember anything in regard to learning about robots.

“This was not anywhere around when I was growing up,” said Fundell, troop leader for the girls.

It was the second time the girls came to learn about science, technology, engineering and math, also commonly referred to as STEM.

Girl Scouts pledges to add 2.5 million girls to the STEM pipeline by 2025, the group’s website says.

The organization goes on to say that the U.S. is facing a STEM workforce crisis, and in the next 10 years, the workforce will need 1 million new STEM professionals.

Last week, the girls designed their own catapults so they could launch little Lego people.

This is the first time Wiercinski has offered a program like this for the young girls, but he hopes they can continue it for years to come.

And the girls enjoyed every moment of the robots and flinging the little Lego people. They giggled, laughed, smiled.

“That’s exciting for me as a teacher that we’re already inspiring them at that age,” Wiercinski said.

When she was dropping off the girls to go home, at least one mentioned that she wants to enroll in the class when she comes to L-P.

“That’s what I wanted to hear,” Fundell said.

She hopes this is the start of a partnership between the Girl Scouts and L-P, and as the girls age, they will be able to get involved with more advanced activities.

How China Will Take Over The World