Blog - Latest News
You are here: Home1 / Around The Web2 / Business3 / Zume Shuts Down its Robot-Powered Pizza Business 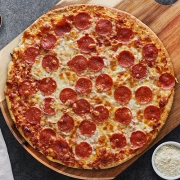 Robot-powered Zume Pizza, which was recently said to be valued at close to $4 billion, is no more—at least not as a pizza-making operation.

The 5-year-old Mountain View, Calif.-based company this week said it will cut 172 jobs there, 80 jobs in San Francisco and 78 positions in Seattle, according to documents filed with state labor agencies.

In laying off 53% of its workforce, Zume is shutting down its pizza delivery business and is shifting its focus to food packaging, production and delivery systems. The focus shift will require the company to add 100 new jobs, which the laid-off employees could apply for, according to a Zume spokesperson.

The company was reportedly burning through $10 million a day last summer, with that figure rising significantly by the end of the year, according to Bloomberg news service.