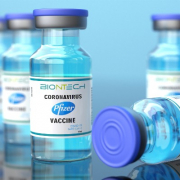 UK health authorities announced on Wednesday that those with a ‘significant history of allergic reactions’ should not be given the Pfizer/BioNTech coronavirus vaccine, after two health care workers experienced allergy symptoms the day after receiving a shot of the newly released vaccine.

The two health care workers ‘responded adversely’ to the shots, which were given to them on the first day of the UK’s mass vaccination rollout of the Pfizer/BioNTech, National Health Service England said.

Both staff members, who each carried an adrenaline auto injector and had significant histories of allergic reaction, developed anaphylactoid reaction symptoms after they had received the vaccine on Tuesday. Thousands in the UK were vaccinated on Tuesday, the first day of the mass rollout.

“As is common with new vaccines the MHRA [Medicines and Healthcare products Regulatory Agency] have advised on a precautionary basis that people with a significant history of allergic reactions do not receive this vaccination after two people with a history of significant allergic reactions responded adversely yesterday,” said Stephen Powis, the national medical director for NHS England, in a statement. “Both are recovering well.”

Following news of the allergic reactions, the MHRA announced new advice to the health care industry, urging those with a significant allergic reaction to a vaccine, medicine or food not to receive the vaccine. Those with a previous history of anaphylactoid reaction, or those who have been told to carry an adrenaline autoinjector should avoid the vaccine, according to the advice.

The advice also states that vaccines ‘should only be carried out in facilities where resuscitation measures are available.’

“We are fully investigating the two reports that have been reported to us as a matter of priority,” an MHRA spokesperson said.

“Once all the information has been reviewed we will communicate updated advice,” the spokesperson added.

The MHRA also advised anyone with a history of a significant allergic reaction that was due to receive the Pfizer/BioNTech vaccine to speak to the health care professional that would be administering the vaccine.

“We have been advised by MHRA of two yellow card reports that may be associated with allergic reaction due to administration of the COVID-19 BNT162b2 vaccine,” the MHRA said in a statement.

“As a precautionary measure, the MHRA has issued temporary guidance to the NHS while it conducts an investigation in order to fully understand each case and its causes. Pfizer and BioNTech are supporting the MHRA in the investigation,” the statement said.

“In the pivotal phase 3 clinical trial, this vaccine was generally well tolerated with no serious safety concerns reported by the independent Data Monitoring Committee. The trial has enrolled over 44,000 participants to date, over 42,000 of whom have received a second vaccination.

“Most people will not get anaphylaxis and the benefits in protecting people against COVID-19 outweigh the risks… You can be completely confident that this vaccine has met the MHRA’s robust standards of safety, quality and effectiveness.”

The US Food and Drug Administration released documents this week that said data from the Pfizer/BioNTech trials indicated that there were more adverse responses that were interpreted as allergic reactions among the vaccine group (0.63%), than among the placebo group (0.51%).

Dr June Raine, the head of the MHRA, told a joint select committee hearing that “real-time vigilance” would continue even now the vaccine had been deployed.

“Even last evening we were looking at two case reports of allergic reactions.

“We know from the extensive clinical trials that this was not a feature, but if we need to strengthen our advice now that we have had this experience in vulnerable populations, the groups selected as a priority, we get that advice out immediately.”

A US official told Reuters on Wednesday that there is the possibility that Americans with known severe allergies will not be candidates for Pfizer’s Covid-19 vaccine until more is understood about the reactions in the UK.

With Canada having already approved the Pfizer vaccine, health minister Patty Hajdu said it would investigate the reported adverse reactions in the UK but was keen to add that hiccups were to be expected and would not inherently change the risk or benefit of the shot.

Pfizer has said that people with a history of severe allergic reactions were excluded from their late-stage trials, which is reflected in the MHRA’s emergency approval protocol. The reactions may, however, have been caused by a component of the vaccine called polyethylene glycol, which has been used to help stabilize the shot and is not in other vaccines.

“The regulator is likely to investigate what may have caused the reactions. The vaccine contains RNA, the genetic material of the coronavirus, as well as a liquid to stabilize and dilute it during the injection,” Sky’s Thomas Moore said.

“Some vaccines already carry health warnings for people prone to allergic reactions – people who have an egg allergy are told not to have certain brands of flu vaccine because they are grown in eggs.

“Many scientists believe RNA vaccines are ‘purer’ and less likely to cause side effects.”