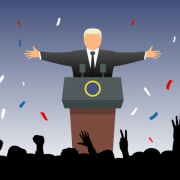 After police finally removed the mob that had been encouraged by President Trump, lawmakers were able to resume their session and certify the result of the election, paving the way for Biden to be sworn in as president on January 20. In response, Trump finally mustered a pledge of an orderly transition of power.

“Even though I totally disagree with the outcome of the election, and the facts bear me out, nevertheless there will be an orderly transition on January 20,” the president said in a statement following the conclusion of the counting of electoral college votes.

The chaotic scenes on Wednesday came after months of rhetoric from Trump and some of his Republican allies, who claimed that the result of the November 3 election was reached fraudulently and that Trump was the true winner. Trump’s refusal to accept defeat and his subsequent calling of arms to his fans to march on the Capitol is unprecedented in modern US history.

Senate Democratic leader Chuck Schumer released a statement following the Capitol attack, suggesting that Trump should be removed from office after his actions.

“What happened at the US Capitol yesterday was an insurrection against the United States, incited by the president. This president should not hold office one day longer,” Schumer said in a statement.

“The quickest and most effective way – it can be done today – to remove this president from office would be for the vice-president to immediately invoke the 25th amendment. If the vice-president and the cabinet refuse to stand up, Congress should reconvene to impeach the president.”

Republican congressman Adam Kinzinger also called for invoking the 25th amendment in the aftermath of Wednesday’s chaos, and some progressive lawmakers, including congresswoman Alexandria Ocasio-Cortez has said Trump should be impeached for the second time.

“Let me be very clear. The scenes of chaos at the Capitol do not reflect a true America, do not represent who we are. What we’re seeing are a small number of extremists dedicated to lawlessness,” president-elect Joe Biden said during a public address condemning the violent attacks.

“The world’s watching. Like so many other Americans, I am genuinely shocked and saddened that our nation, so long, the beacon of light and hope for democracy has come to such a dark moment. Through war and strife, America’s endured much and we will endure here and we will prevail again, and we’ll prevail now.

“The work of the moment and the work of the next four years must be the restoration of democracy, of decency, honor, respect the Rule of Law, just plain, simple decency, the renewal of a politics.”

Trump has come under further criticism for the way he reacted to the violence and his attitude towards the terrorists who stormed the Capitol. Instead of condemning them or their acts of terror, Trump instead praised the offenders and even professed his love for them, a reaction that many have guessed would be different if they were not Trump supporters.

“I know your pain. I know you’re hurt. We had an election that was stolen from us. It was a landslide election, and everyone knows it, especially the other side, but you have to go home now.
We have to have peace. We have to have law and order. We have to respect our great people in law and order. We don’t want anybody hurt. It’s a very tough period of time,” the president said in a video posted online during the Capitol attacks.

“There’s never been a time like this where such a thing happened, where they could take it away from all of us, from me, from you, from our country. This was a fraudulent election, but we can’t play into the hands of these people. We have to have peace.

“So go home. We love you. You’re very special. You’ve seen what happens. You see the way others are treated that are so bad and so evil. I know how you feel. But go home and go home at peace.”

Billionaires Add $1 Trillion To Their Net Worth As Millions Of Their Workers...
Scroll to top