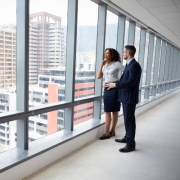 The continued peaks and troughs in the economy’s recovery due to localized lockdowns and spikes in infection rates is putting more pressure on the commercial real estate industry than ever before, and leaving the sector at greater risk of collapse.

There is no denying that the real estate sector is being hit from all angles due the ongoing effects of COVID-19. Infection rates are rising across the globe as economies try to reopen and adapt to the ‘new normal’, but worrying levels of infection are leading to more localized lockdowns and greater restrictions in areas categorized as ‘COVID hot spots’. In the UK, Prime Minister Boris Johnston announced a spectacular u-turn on his desire for people to return to offices, asking workers to yet again work from home if they were able to. Many businesses that have invested heavily in migrating their business to a virtual operation are now questioning whether they even need to keep their buildings in light of the likelihood of remote working continuing into 2021 and beyond. In fact, a report in the Guardian revealed that almost 75% of businesses are currently reviewing their office space provision. This was particularly the case for insurance and banking institutions, where the vast majority of office-based work does not actually require everyone to be in the same building 24/7.

Coupled with this is the ongoing pressure on movie theaters to remain profitable without having the crowd-pulling movies available to showcase. Disney made the decision to release the much anticipated Mulan movie straight to Disney Plus and it was recently announced that the already delayed 007 Bond movie ‘No Time To Die’ would now not be released until April 2021. Boris Johnston publicly urged the public to visit the cinema to help support the struggling sector, but with a lack of attractive options on the big screen, it is no wonder that numbers remain staggeringly low. The further delay of No Time To Die has been described as a ‘nail in the coffin’ for smaller theaters, with national chain Cineworld announcing that it was to close all of its cinemas until next year. This has led to the loss of 5,500 jobs as staff have been asked to accept redundancy with the hope that they can be re-employed next year when the chain reopens for business.

What is becoming clear is that many businesses that require footfall within a physical store are becoming unviable and if things continue as they are, may be forced to close. This will leave many retail units empty with no real prospects of tenants coming in to replace them any time soon. In addition, those businesses that can function from home are now paying rent and rates on empty buildings with no clear visibility on if or when staff will return to the office once again. As organizations review their expenditure and look to make cost reductions in light of a difficult few months ahead, it is not surprising that reviewing their property needs will be high on their agenda. Landlords will be keen to keep their commercial properties occupied, but there is going to be very little they can do to incentivize an organization to remain in a property that delivers no commercial benefits to the business and is actually a drain on vital cashflow.

Despite the doom and gloom however, there are many who are focusing on the opportunities rather than dwelling on the problems. Whilst it is likely that the occupants of commercial units may change, landlords can rest assured that for some, this shift will present opportunities to push forward with a new kind of high street experience. In an article for Forbes, Michelle Evans discussed a ‘reimagining of store pickups’. She reveals that click and collect options are becoming a preferred route for consumers, and that in the future more drive-through locations could become attractive to retailers who want to increase their click and collect services.

Social distancing is likely to be in force for the foreseeable future and there are going to be sectors which may struggle to hold onto their bricks and mortar presence. A high street that was already struggling is going to see even lower levels of footfall and a greater emphasis on e-commerce sales. Offices that once dominated the landscape and fuelled a healthy lunchtime trade for local businesses may never return to full capacity, with suggestions that remote working could become a permanent fixture in many organizations. But, amidst the uncertainty and negativity, there is the very real prospect that the high street will remain, it is just going through a process of ‘reimagination’. Just because we can’t see what the future will look like, doesn’t mean it won’t be great once we get there. We just have to buckle down and prepare for the ride.

US To Hit 8 Million Covid-19 Cases As Daily Rates Of Infection Surpass 50,0...
Scroll to top