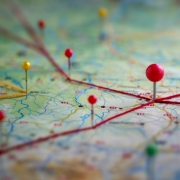 Denmark has recently announced its majority stake in the world first artificial ‘energy island.’ The offshore wind farm will be built in the North Sea, 50 miles or 80km offshore west of the Jutland peninsula. The energy island is a £25 billion ($34.5 billion) project, of which Denmark will have a 51% stake, the rest held by the private sector. The island will initially span an area of 120,000 square meters (30 acres) and will be able to power 3 million households with green energy in its first phase. The island will be bordered on three sides by a sea wall, the fourth side acting as a harbor for vessels that will service the turbines surrounding the island.

On the project, Denmark’s climate minister, Dan Jørgensen stated: “This is truly a great moment for Denmark and for the global green transition. The energy hub in the North Sea will be the largest construction project in Danish history. It will make a big contribution to the realization of the enormous potential for European offshore wind.”

Construction will start in 2026, and aims to turn Denmark into a net exporter of clean energy to other countries. Denmark is currently part of the Paris Climate agreement, an agreement under the United Nations framework which aims to limit the global warming temperature from ricing and requires countries to commit to increasingly ambitious efforts to tackle climate change. The deadline of which is 2030. Many are worried that Denmark’s ambitious energy island may not be completed by 2030 and therefore not contribute to it’s part of the Paris Climate agreement.

The project is part of an inter-party deal in June on Denmark’s energy policies, the parties agreed to construct two wind energy hubs which will initially support 5GW of wind generation and later possibly be expanded to 12GW. Even initially, the 5GW would triple Denmark’s current production of offshore wind. Although the ‘energy island’ is projected to have a completion date of 2033, the Danish government are being called on to work with private sector partners to aim to bring the project online earlier. The Guardian reported: ‘The government has committed to launching discussions with windfarm developers and other companies and investors as soon as possible, with the aim of developing a legal framework for tendering for the remaining 49% stake.’

In another major move, South Korea has announced the planned construction of its own offshore farm, which, in terms of size, will exceed the largest currently in existence. IFL Science reported: ‘the lack of shallow-water sites in some parts of the world is one obstruction to offshore wind’s growth, but a much bigger one has been the cost. Until recently, offshore wind has been so expensive to build that it accounts for roughly 0.5 percent of global electricity production. These two developments indicate that this is about to change.’

IFL Science also reported: ‘Innovative as the construction of an artificial island may be, by the time it’s finished the farm it will serve is unlikely to be the world’s largest. For a start, it will probably be beaten by the 8.2 GW behemoth just approved by South Korean President Moon Jae-in. “The wind farm to be built on the waters off Sinan will be as much as seven times the size of the world’s current largest wind power complex,” Moon said in a statement. Moon has a goal of abolition of coal, currently his nation’s largest source of power, by 2030. As a densely populated country, South Korea has struggled to find space for solar farms, but the Yellow Sea to its south is if a good depth for wind farms, although wind speeds are slower than off Denmark. The project will cost 48.5 trillion won ($43 billion), mostly from companies that have already signed on.’

On Denmark’s North Sea energy island, Dan Jørgensen spoke to The Guardian stating: “This is huge for Denmark, we are taking a step into the next era of offshore wind. We were the first country in 1991 to build an offshore wind farm, and now we are taking the next step. The 10GW when this is finalized will be producing far, far more clean energy than we can use as a country, so this is part of a strategy to help other countries meet their targets.”

‘He called the 51% stake a “perfect compromise” that would bring in private expertise and make it “a very lucrative business both for the private investors and for the Danish state”.’

How Commercial Real Estate Will Advance In 2021 Thanks To Digital Marketing...

Remembering Salsa Icon Johnny Pacheco, Who Passed Away At 85 This Week
Scroll to top