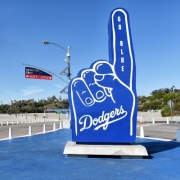 After a wait of more than thirty years, the Los Angeles Dodgers have been crowned World Series champions for the seventh time. The victory comes in a Covid-impacted season that has looked like no other before it and signals a successful year for Los Angeles sports; the Lakers also picked up a championship just weeks ago. Playing in front of a reduced capacity crowd mainly consisting of Dodgers fans at Globe Life Field in Arlington, Texas, the Dodgers defeated the Tampa Bay Rays 3-1 in Game Six to clinch the title and send their fans into raptures. It was not all plain sailing for the Dodgers, however, as third baseman Justin Turner was forced to leave the contest before it concluded because of a positive Covid-19 test. Celebrations on-field as well as in the stands took place with masks on.

“It’s a bittersweet night for us,” MLB commissioner Manfred said in an on-field interview on FOX Sports. “We’re glad to be done. I think it’s a great accomplishment for our players to get the season completed, but obviously we’re concerned when any of our players test positive. We learned during the game that Justin was a positive. He was immediately isolated to prevent spread.” The Dodgers have been dominant in baseball over the past half a decade and have appeared in three of the past four World Series, losing all of them. The last time the LA team won it all was in 1988, a full ten years before the inception of the Tampa Bay Rays franchise. This was the Rays’ second World Series appearance, also losing the first in 2008, going down 4-1 to the Philadelphia Phillies.

“I had a crazy feeling that came to fruition,” Dodgers manager Dave Roberts said. “It’s just a special group of players, organization, just all that we’ve kind of overcome, I just knew that we weren’t going to be denied this year. We said it. This is our year. Everyone in this ballpark wearing Dodger blue, everyone all over the world wearing Dodger blue, never wavered. This is our year.” Because of the pandemic, the MLB was forced to play its 2020 regular season without any fans in attendance. The season was dramatically shortened from 162 games to 60 and unlike in the NBA, WNBA and NHL, there was no bubble format, meaning teams travelled to and use their own stadiums. In the National League, designated hitters were implemented for the first time in history, while the league also introduced seven-inning doubleheader games, mainly used to counteract the impact of Covid-19 outbreaks on the St Louis Cardinals and Miami Marlins. If a game required extra innings, each team would begin their half inning with a runner on second base.

“We had an unbelievable postseason on both sides of the field. We ran bases, we pitched, we played defense. We scored runs when we needed to. You can’t say enough about what we did this year.” “To be able to win and to be able to do it with a team like this, it means everything,” Seager told reporters. “Obviously going through the injuries and everything like that and missing out on a World Series chance, it hurt. But to be able to come back and get back in the same place with this core and to know what it feels like to lose, it’s special.”

“You really can’t,” Seager said, asked after the game if it was possible to put the implications of the final inning out of your head. “The nerves definitely start creeping in towards the end of the game. But you’ve got to shut them out. You got to finish the job. We know more than anybody that the game is not over until you make 27 outs. So to be able to finally accomplish that and get the last out, it’s surreal, and it’s unbelievable.”