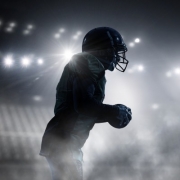 Despite a relatively impressive start to the 2020 season, veteran quarterback Ryan Fitzpatrick has been told that he is being replaced as the Miami Dolphins’ starting quarterback. Fitzpatrick will be replaced by rookie Tua Tagovailoa, who suffered a career-threatening hip injury in his final college appearance just 11 months ago.

The Dolphins are currently sat in second place in the AFC East with a record of 3-3 following comprehensive victories in consecutive weeks against last year’s Super Bowl losers the 49ers (43-17) and then the hapless Jets (24-0). Because of those victories, the timing of the decision to drop Fitzpatrick has come into question, especially as the 37-year-old has impressed with his own individual performances.

However, Tagovailoa was always set to take over the starting role at some point this season after being drafted fifth overall this year and Fitzpatrick’s performances have not been spotless; the journeyman QB ranks third in the league for interceptions thrown this season.

“We feel like that’s the best thing for the team,” Dolphins head coach Brian Flores said. “We talked about it as a staff, with (General Manager) Chris (Grier), the personnel department. We just felt like it was the best move for the team right now. That’s how we’re going to move forward.”

“I think he’s practiced well,” Flores said of the decision to make the switch. “He works hard in meetings and walkthroughs and he’s got a good rapport with his teammates.”

“He’s been a tremendous asset and leader on this team,” Flores said when asked about Fitzpatrick. “He’s been great really for the last year and a half. I don’t know if there’s anybody who has been more instrumental in trying to instill a culture and embody a lot of the things we’re looking for from a toughness, competitiveness, team first (standpoint). He’s made an impact on Tua, but also a lot of players on this team, so I have a great respect for him.

That made this decision very tough.”

Fitzpatrick has started for eight teams during his 16-year professional career, the most of any quarterback in NFL history. Along the way, the 37-year-old has picked up a wealth of experience as both a backup and starting thrower for his team. Fitzpatrick, or Fitz as he is better known, has consistently demonstrated a stellar attitude regardless of the situation he has been in and a number of Dolphins players and staff have said part of the reason that Tua is ready to start is because of Fitzpatrick and his work ethic.

“My heart just hurt all day,” Fitzpatrick told reporters after the news was announced. “It was heart-breaking for me. Flo said what he said, and said what he said to you guys as well, and that’s the decision and direction the organization is going in. Obviously, we’ve talked in the past about how, I’m the placeholder, and this eventually was going to happen. It was just a matter of when, not if. It still just broke my heart yesterday and it’s a tough thing for me to hear and to now have to deal with. And I’m going to do my best with it.”

“I basically got fired yesterday, and today my day consisted of Zoom meetings with the guy that fired me and sitting in a room with the guy who replaced me for four hours,” he said.

“I’ve been benched for all kinds of different ways, but this was kind of the first place other than Buffalo that I’ve been fully committed and invested. I felt like it was my team,” he said.

“I know how difficult it is to play quarterback and how important it is to have everyone in that room pull in the same direction,” Fitzpatrick said. “I’ll have some time to get away and digest it a little bit, but when this thing starts up again, I have to do my best for Tua.”

Following their blowout victory of the Jets last weekend, the Dolphins are now heading into a bye, giving the offense and Tagovailoa time to build up as much chemistry as possible before their season resumes. When it does, Tagovailoa and his Dolphins team will face tough matchups against first the Rams, then the Cardinals.

“Having someone like Fitz, you start thinking about what other people are doing,” Tagovailoa said. “The defense, how they align to stack formations, how fronts can dictate coverages. Things that I didn’t really need to worry about in college I think of now.”

“It really is about the little things,” Tagovailoa said. “And it’s not like it stops here. It’s a continuous competition with Fitz and what’s so cool about it is I can continue to grow and learn from him through this process.”

“My goals are to do whatever I can to help this team become successful, especially our offense,” Tagovailoa added. “Everyone knows Fitz has done a tremendous job. I feel lucky that I can continue to learn from a guy like Fitz but also having the mind of Chan to put me in a good position.”