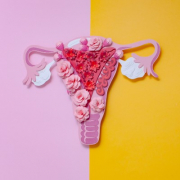 The month of March is endometriosis awareness month and is observed worldwide via raising awareness, whether fundraising, educating or events. Endometriosis is a debilitating condition that affects around 1 in 10 women in the United States and the United Kingdom.

Approximately 200 million persons worldwide are affected by the condition. At the moment, there is no cure for the condition, only ways to ease the symptoms and diagnosis times range between an average of 8-10 years, despite it being one of the most common gynecological conditions. Many have pointed to the historical lack of research into female-centric conditions as rooted in the problematic gender health gap. Campaigners have argued that Endometriosis research is chronically underfunded. However, there is some new research being done into new treatments.

Endometriosis is a condition that causes heavy and painful periods, fatigue, pain during sex, pain when going to the toilet and even problems with fertility. It is debilitating, often affecting all areas of a person’s life including their mental health and ability to work. Endometriosis occurs when the cells (endometrial cells) that line the womb appear elsewhere in the body. The cells still break down like those in the womb according to the menstrual cycle and therefore bleed during a monthly period – but as there is nowhere for the blood to go, this trapped causes extreme pain and the build-up of scar tissue.

Current treatment plans include, keyhole surgery to cut away at the tissue, hormone treatments such as the contraceptive pill or Mirena Coil to limit the build-up of the womb lining or limit periods, or pain relief to treat the symptoms. In extreme cases some opt for hysterectomies.

The University of Edinburgh is currently looking at the effects of dichloroacetate – a drug used to treat rare metabolic conditions in children. Dichloroacetate helps to control lactate levels which are found to be higher in some patients with endometriosis. Unlike other drugs to treat the condition – it is non-hormonal. Hormonal drugs such as birth control pill can affect different patients in a variety of ways, causing an array of unwanted side effects, it often takes endometriosis patients a long time to find the best fit.

Further, some women may want to try for a baby so contraceptives not plausible. The trial is currently spanning twelve weeks and involves 30 women, but has apparently seen positive results and is hoping to receive enough funding to expand to 400 volunteers.

Another study from the University of Oxford is looking at the genetics of the condition. The BBC reported:

‘For the past three years, Prof Krina Zondervan and her team have been analyzing tissue samples donated by 60,000 patients with endometriosis around the world. It’s the largest study of its kind ever undertaken. Their soon-to-be published work reveals new details about endometriosis, including confirmation that it is not one single condition. They have also uncovered genetic links to other inflammatory conditions such as asthma and osteoarthritis, and pain conditions such as migraines and back pain.

Prof Zondervan says they hope the understanding will mean they can investigate whether drugs currently used for those conditions could be repurposed to treat endometriosis: “And that will really speed up the process of drug discovery.” In simple terms, now that a link has been discovered, a drug used to treat asthma could be tweaked to treat endometriosis. That process would be a lot quicker than building a drug from scratch.’

More research projects are hoped to be highlighted in papers published from the World Congress on Endometriosis taking place between the 6th to the 10th of March.

Raising awareness around conditions such as endometriosis is important, as periods for young girls and women are still so often taboo. Therefore, those suffering with heavy periods and severe pain often believe It is normal for a long time. Employers are often not aware or sympathetic to the condition, and therefore women often try to get on with it rather than seeking the help that they need. Some girls will even skip school as a result of pain.

By starting a conversation, more women might be able to recognize the symptoms and get the help they need earlier on in the condition.

Further, campaigns from various organizations and charities such as Endofound (Endometriosis Foundation of America) in the US, the Endometriosis Association globally, and Endometriosis UK in the United Kingdom have been campaigning to increase awareness, fund research, facilitate training and care both inside the medical community and out – calling on their respective governments to do more for women’s care.