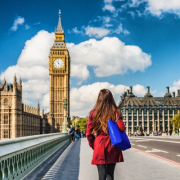 The US Centers for Disease Control and Prevention (CDC) has this week announced new testing measures for travelers arriving into the country from the UK, but research by scientists actually working in the agency has shown that the new rules may only have a small impact on the spread of the new UK strain of coronavirus.

Starting on Monday, passengers traveling to the US from the UK must have proof of a negative Covid-19 test within three days of boarding the flight.

“Today, President Trump is taking another step to protect the health of the American people by requiring air passengers arriving from the United Kingdom (U.K.) to test negative, via PCR or Antigen test, no more than 72 hours before departure from the U.K. to the United States,” a CDC press release on the new measures said.

“The public health authorities in the United Kingdom recently announced the discovery of a new variant of SARS-CoV-2. Viruses constantly change through mutation, and preliminary analysis in the U.K. suggests that this new variant may be up to 70% more transmissible than previously circulating variants.”

According to researchers on the CDC’s own Covid-19 research team, requiring tests to be completed three days before the flight may not actually result in much difference, only reducing the risk of spreading the virus by just 5 percentage points.

Dr. Paul Offit, an infectious disease specialist at the University of Pennsylvania, said the new testing requirement “is like putting up a chain link fence to keep out a mosquito.”

The CDC’s order acknowledges that “testing does not eliminate all risk,” but claims that when it is combined with other measures such as self-monitoring for symptoms, wearing masks and social distancing, “it can make travel safer.”

“On March 14, President Trump issued a Presidential Proclamation external icon to suspend the entry of foreign nationals who visited the United Kingdom in the past 14 days. This has reduced air travel to the U.S. from the U.K. by about 90%,” the CDC statement continued.

“This additional testing requirement will fortify our protection of the American public to improve their health and safety and ensure responsible international travel. The order is consistent with existing CDC testing guidance plus the HHS, U.S. Department of Transportation, and Department of Homeland Security joint guidance in the ‘Runway to Recovery’ document.”

The CDC cut off travel from the UK for foreign nationals in March, bringing travel from the UK to the US down by 90%, from about 30,000 to 3,000 passengers per day, a federal official told CNN.
The CDC has also introduced additional recommendations for international travelers, including getting tested both one to three days before a flight as well as three to five days after the journey has been completed. The CDC also recommends that travelers isolate at home for seven days after travel, even if they have tested negative.

Tests for Covid-19 often miss very recent infections, so it is easy for someone to test negative and actually be infected because they are not yet shedding enough virus to be detected.
“This new order is consistent with the measures that have been taken so far to increase our ability to detect and contain COVID-19 proactively and aggressively,” the CDC statement continued.

“Passengers are required to get a viral test (i.e., a test for current infection) within the 3 days before their flight from the U.K. to the U.S. departs, and provide written documentation of their laboratory test result (in hard copy or electronic) to the airline. Airlines must confirm the negative test result for all passengers before they board. If a passenger chooses not to take a test, the airline must deny boarding to the passenger.”

US researchers studying the new UK strain of the coronavirus believe that it arrived in the States sometime around mid-November and that it is likely that many people across the country have already been infected by it.

“If I had to guess, I would say it’s probably in hundreds of people by now,” said Michael Worobey, head of the department of ecology and evolutionary biology at the University of Arizona. “It’s very possible it’s arrived multiple times in multiple places.”

Scientists have been studying genetic sequences of Covid-19 in the US in order to see if any match up with the new UK variant. No match has been found so far, but health officials believe that this is likely because the US surveillance system is not yet catching them.

Only around 51,000 of 17 million US cases the CDC has tallied have been sequenced, less than half a percent.

“You really need to assume that it’s here already, and certainly is not the dominant strain, but I would not be surprised at all if it is already here,” Dr Anthony Fauci, the director of the National Institute of Allergy and Infectious Diseases, said Tuesday.