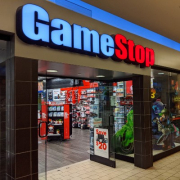 GameStop Corp shares jumped by over 10% in early deals Friday as retail investors pushed up the price in a renewed rally that will likely see the stock achieve its second-best week.

Options market activity in the stock, which has returned to the top of many lists as part of a social media trading phenomenon, suggested that those investing were placing their bets on higher price, higher volatility, or both.

“GameStop announced the resignation of its CFO last night. Some may have taken this as a good sign that RC Ventures is making a difference at the company in terms of trying to accelerate the shift to digital,” said Joseph Feldman, an analyst at Telsey Advisory Group.

Shares in the gaming firm peaked at $120.09 in premarket trading, a value that is set to triple this week, if gains hold. With a big batch of weekly contracts maturing on Friday, further support could be incoming from holders of options of the GameStop stock.

This value is still some way away from the heights hit in January, when hedge funds betting against the video game retailer were forced to cover short positions as individual investors using Robinhood and other trading apps pushed the stock to a whopping $483.

Refinitiv data on options showed retail investors have been buying deep out-of-the-money call options, which are options with contract prices to buy or sell far from current prices.

A large proportion of the options deals will expire on February 26, netting handsome gains for those betting on a further rise in GameStop’s stock price.

The trading strategies employed by some on Reddit have drawn reaction from well-known investing heavyweights such as Charlie Munger, long time business partner of Warren Buffett.

“It’s really stupid to have a culture which encourages as much gambling in stocks by people who have the mindset of racetrack bettors,” said Munger, Berkshire Hathaway’s vice chairman.

Data has shown call options which would be profitable for holders if GameStop shares reached $200 then $800 this week have been particularly heavily traded.

Meanwhile, GameStop’s Frankfurt listing fell by 21.3% to trade at 98.19 euros, in a move that almost entirely saw its value converge with that of the U.S.-listed stock, which added nearly a fifth in value on Thursday.

In other business news, International Airlines Group, the owner of British Airways and other aeronautical firms, has reported a record loss of $9 billion. The company has called for the introduction of digital health passes for passengers in order for the airline industry to get back on its feet in a timely manner.

IAG announced that passenger capacity throughout 2020 was at a third of the level of the year prior and in the first quarter of this year, the firm is running at only a fifth of pre-Covid levels. The airline group reported an annual operating loss of just shy of $9 billion, including ‘exceptional’ items relating to fuel and currency hedges, early fleet retirement and restructuring costs. This is compared to a profit of $3.2 billion in 2019.

“Our results reflect the serious impact that Covid-19 has had on our business,” said Luis Gallego, the chief executive of IAG. “The group continues to reduce its cost base and increase the proportion of variable costs to better match market demand. We’re transforming our business to ensure we emerge in a stronger competitive position.”

The airline group said that because of the uncertainty over the impact of the pandemic on its business, it would not provide profit guidance for this year and called for an international plan to “reopen the skies”.

Gallego said: “The aviation industry stands with governments in putting public health at the top of the agenda. Getting people travelling again will require a clear roadmap for unwinding current restrictions when the time is right. We know there is pent-up demand for travel and people want to fly. Vaccinations are progressing well and global infections are going in the right direction. We’re calling for international common testing standards and the introduction of digital health passes to reopen our skies safely.”

“These results from IAG really do bring out just how painful the last year has been for the airline industry,” said Jack Winchester, an analyst at Third Bridge. “Investors have been willing to plug IAG’s finances on the assumption of an eventual recovery but when the dust settles we are likely to see that low-cost carriers like Ryanair and Wizz Air have come out of 2020 in far better shape.”

“I remain optimistic that Gatwick will recover,” said Stewart Wingate, the airport’s chief executive. “Before air travel recovery begins … we also need the UK government to provide further support by extending the furlough scheme for a few more months and providing business rate relief, as airports have been afforded in Scotland, for the current financial year.”