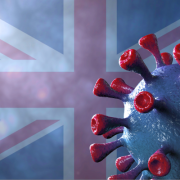 There have been several new variants of the COVID-19 virus since its emergence in Wuhan in 2019 and mutations are expected in any virus. The rate of mutation in SARS-CoV-2 is apparently low compared to other viruses such as the flu. However, viruses have the opportunity to mutate as more and more humans become infected with the virus, therefore, the reduction of virus transmission is essential to limit virus mutation. One particular strain of SARS-CoV-2, named the B.1.1.7 variant, emerged in the United Kingdom last year. It is already considered to be more infectious than the original virus, being 30-70% more transmissible due to alterations in the spike protein. Its emergence and rapid spread lead to the eventual full lockdown of the entirety of England. Recently, British Prime Minister, Boris Johnson stated that the new variant of the virus may be more deadly.

At the press briefing, Boris Johnson stated: ‘”In addition to spreading more quickly, it also now appears that there is some evidence that the new variant – the variant that was first identified in London and the south east – may be associated with a higher degree of mortality. It’s largely the impact of this new variant that means the NHS is under such intense pressure.”

It is important to note that the evidence is still preliminary and there is still a lot of uncertainty around numbers. It is reported that vaccinations are still expected to work against the variant. The data was derived from mathematicians comparing death rates of people infected with the new or older versions of the virus. Public Health England, Imperial College London, the London School of Hygiene and Tropical Medicine and the University of Exeter have all been studying how deadly the virus is. However, scientists on the New and Emerging Respiratory Virus Threats Advisory Group concluded that there is a realistic possibility that the virus has become more deadly, yet this is still not certain.

New Scientist reported that the New and Emerging Respiratory Virus Threats Advisory Group found the B.1.1.7 variant to be 30% more deadly, but the London School of Hygiene and Tropical Medicine and at Imperial College London have so far found the virus to be between 29 and 36 percent more lethal. However, this evidence is again still in the early stages. According to Sky News, ‘Dr Mike Tildesley, who advises the government’s Scientific Advisory Group for Emergencies (SAGE), said it was “possibly a little bit presumptuous” of the prime minister to present the findings “in the very early stages”’ adding that as more data is collected over the next few weeks the findings may change but it still should be approached with caution.

The Washington Post reported: ‘England’s chief scientific adviser, Patrick Vallance, offered an example. He said that among 1,000 men in England age 60 or older who get infected, the original virus would kill 10. The new variant, he said, would kill 13 or 14. That would represent a 30 percent rise in mortality, though it is important to note that absolute risk of death remains low.’

Sir Patrick Vallance also stated: “I want to stress that there’s a lot of uncertainty around these numbers and we need more work to get a precise handle on it, but it obviously is a concern that this has an increase in mortality as well as an increase in transmissibility.”
The analysis of hospital data found no increase in the death rate but this is reportedly due to the improvement of doctors and hospitals in treating the disease over the course of the pandemic. Both the Pfizer and Oxford-AstraZeneca vaccination are expected to work against the B.1.1.7 variant but Vallance did raise concern about the two variants from South Africa and Brazil whose ‘certain features’ may mean that they are less susceptible to the vaccines.

The variant is was first detected in England but has now also been detected in, or spread to, other countries such as the United States of America. As New Scientist reported: ‘The highly transmissible coronavirus variant first sequenced in the UK has now been found in at least 22 US states, with almost 200 cases identified so far in the US as a whole, according to the US Centers for Disease Control and Prevention.’ National Geographic also wrote ‘the variant is now circulating in more than 60 countries, including the United States—and projections suggest it will become the most common virus variety in the U.S. by mid-March.’