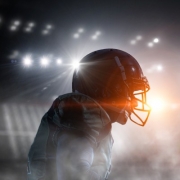 The NFL has issued the Chicago Bears wide receiver a two-match suspension without pay for his actions in the week eight matchup against the New Orleans Saints. After a play was whistled dead in the third quarter, Wims ran up to Saints cornerback C.J. Gardner-Johnson and punched him twice in the helmet, causing a mass brawl between the two sets of players.

Earlier on in the third quarter, Wims and Gardner-Johnson had been seen in a heated exchange at the end of a play, with Gardner-Johnson appearing to yank Wims’ mouthpiece before the two were separated. Before throwing the two punches, Wims seemed to rip Gardner-Johnson’s mouthpiece out in retaliation. Wims drew a 15-yard penalty and was quickly ejected from the game.

“I’m just going to continue going back, I am really, really bothered by that third-quarter incident. That bothers me. I’m being completely honest with you guys. It bothers me,” Bears head coach Matt Nagy said in Sunday’s post-game press conference.

“It’s brutal,” Nagy said Sunday. “You go from second-and-5 to second-and-20. That’s hard. What I don’t like is you come out, it’s a tie game and you have an opportunity to do some things and we go the other way. I felt like it took the sting out, the fire, for a little bit. We had to regroup. The defense, at least in that situation with the field position, was able to hold them and not let them score touchdowns. But we had to regroup offensively on the sideline and just let these guys know, ‘Let’s go. Get on track and get out of that.’ That’s kind of where we were with that.”

“We’ve talked to him and told him that that’s not how things go here,” Nagy said. “One of Javon’s strengths is his character, who he is as a person. He’s since apologized. But you don’t have that. There’s no part of that in this game. That’s not how we roll here.”

The NFL have decided to uphold Wims’ two-game ban and have suspended him for violating the NFL unsportsmanlike conduct rules. These rules prohibit 1) Striking an opponent in the head, neck or face with a wrist, arm, elbow or hand; 2) And any act which is contrary to the generally understood principles of sportsmanship.

The suspension means Wims, who has been with the Bears for three years now, will miss crucial upcoming games against the Tennessee Titans and Minnesota Vikings and be eligible to return to the field of play on November 17. The former seventh-round Georgia draft pick has picked up five receptions for 35 yards and one touchdown in his eight games so far this season.

NFL Network reported Monday that Wims told Chicago Bears staff that Gardner-Johnson had attempted to spit on him in their previous disagreements on the day. Gardner-Johnson has refuted these claims, instead arguing that the attack was relatively unprovoked. The Saints cornerback was punched by his own teammate Michael Thomas on the practice field earlier in the season, meaning that Thomas was forced to sit out his team’s week five narrow overtime victory over the Los Angeles Chargers.

“It ain’t got nothing to do with me. If he’s acting out, that’s on him,” Gardner-Johnson said. “It wasn’t no incident. We won the game. I mean, everybody, it’s a lot of he said, he said. Ain’t nothing happened. Nobody got spit on.

“Shouldn’t be nowhere near the field of play when the game’s going on. So I ain’t answering no more questions about that.”

Just one play after Wims’ loss of discipline resulted in his ejection and a 15-yard penalty for his team, Bears quarterback Nick Foles threw an interception to Marshon Lattimore at his team’s 39-yard line. The Saints were able to capitalize, converting the possession into a Will Lutz field goal to take a 16-13 lead.

The Saints went on to clinch the overtime win and progress to a record of 5-2 ahead of their crucial Sunday Night Football matchup with division rivals Tampa Bay. For the Bears, the hard-to-take defeat was their second on the bounce and moved them to 5-3 and second place in the NFC North.

“We learned that Chauncey Gardner-Johnson knows how to rub people up the wrong way. It wasn’t quite Gervonta Davis’ vicious knockout punch against Leo Santa Cruz on Saturday night, but Javon Wims threw two right hands at the Saints’ safety before all hell broke loose,” NFL journalist Cameron Hogwood said on the matter.

“That’s the same Chauncey Gardner-Johnson that was punched by Saints receiver Michael Thomas in practice earlier this season. Wims, responding to Gardner-Johnson poking Anthony Miller in the eye, was subsequently ejected from what might prove his final game for some time.

“As for the football, Matt Nagy invited further criticism of his play-calling as the Bears went punt, interception, punt, turnover on downs to begin the second half before falling short in overtime. There’s only so long this Bears defense can continue to hold out for its offense.”

Saving For Your First Home