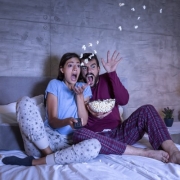 Scary film season is upon us and what better excuse to cuddle up under a blanket with a scary movie then a socially distanced Halloween? With film studios releasing films digitally and streaming services doing their usual roundup of Halloween themed films you will have a variety of movies to choose from, from classic horrors to newly released thrillers. With social distancing and lockdown measures in place, it may be difficult to attend the cinema or catch some of the newest releases in the horror genre this year. However, there are some great 2020 films in the horror/thriller category that have been digitally released or are heading to streaming services ready for Halloween. So, here are some ideas to accompany your frightening film night in.

The Invisible Man (2020)
Elizabeth Moss’ portrayal of this HG Wells-inspired adaptation was slightly eclipsed by the coronavirus pandemic earlier in the year, however that does not mean that it can’t be revived, with high ratings on both IMBD and Rotten Tomatoes, this is a great new Horror/Thriller to add to your Halloween line up. Elizabeth Moss stars as Cecelia, whose abusive ex takes his own life, leaving her his fortune. After a series of events, Cecelia begins to suspect that he staged his own suicide, using his skills as a scientist to become invisible and terrorize her. After no-one believes her she takes matters into her own hands.

Rebecca (2020)
Categorized as a Mystery/Thriller this film may be just the ticket for those who prefer a little less horror for their Halloween fright night. Due to be released on the 21st of October in some cinemas and on Netflix, you could stage a movie night at home. The film is based on Daphne du Maurier’s 1938 gothic novel, and the adaptation stars Lily James and Armie Hammer. The synopsis is as follows: ‘a young newlywed arrives at her husband’s imposing family estate on a windswept English coast and finds herself battling the shadow of his first wife, Rebecca, whose legacy lives on in the house long after her death.’

I’m Thinking of Ending Things (2020)
Jesse Buckley, Jesse Plemons, Toni Colette, David Thewlis Star in this unique horror drama, directed by Charlie Kaufman. Initially released on Netflix in early September, this film has already received pretty good ratings, Rotten Tomatoes giving it 82% and Metacritic 78%. Based on Ian Reid’s novel, the plot follows the psyche of a young woman who is taken to meet her new boyfriends’ parents on a secluded farm. During her visit she begins to question everything she thought she knew about him and herself, in a twisting, and uncertain psychological journey.

Underwater (2020)
This 2020 science-fiction horror film directed by William the bank and starring Kristian Stewart, Vincent Cassel, Jessica Henwick and more. It’s narrates the story of a crew of oceanic researcher working for a deep-sea drilling company at the bottom of the Marina trench. Over 6 miles below the ocean surface a mysterious earthquake devastates their facility, water crashes through the walls of the drilling station. Led by the captain, the survivors only hope is to walk across the sea floor to reach the main part of the facility. Whilst doing so, however, they find they are under attack from mysterious and deadly creatures and struggle in a fight for their lives.

The Rental (2020)
Dave Franco’s directorial debut stars Alison Brie and Dan Stevens in a suspenseful horror-thriller as a couple staying in a vacation home, for a celebratory weekend getaway. However, their seemingly perfect vacation spot slowly turns sinister as the couple becomes increasingly suspicious about their host, who they believe is spying on them.

If you would prefer to keep your horror film fright fest running through to the end of the year, there are a couple of highly recommended movies being released after Halloween. Run (2020) stars Sarah Paulson (of American Horror story fame) as a mother, whose home-schooled teenager suspects her smothering mother of hiding some dark secrets. Host (2020) which received a 100% rating on Rotten Tomatoes, may have flown under your radar so far this year, but it’s highly anticipated release is in December 2020. Directed by Rob Savage and starring Jemma Moore and Hayley Bishop, the film was initially due to release in July 2020 but has since been pushed due to the pandemic. The plot follows ‘six friends who accidentally invite the attention of a demonic presence during an online séance and begin noticing strange occurrences in their homes.’

Kate Lovegrove is a Contributing Editor at The National Digest based in the United Kingdom. You can reach her at inquiries@thenationaldigest.com.