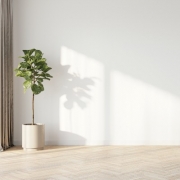 The issue of climate change is being fought on multiple fronts, from those that are choosing to reduce their plastic waste or opt for a plant-based diet, to activists campaigning their governments to put greener initiatives in place. Scientists and Engineers are also looking to halt and reverse the effects of climate change by developing a variety of products that can tend to a multitude of issues under the umbrella of climate change. A recent invention is a new type of white paint that, when applied to buildings, reflects the sun’s rays to the point where it can cool that same surface. It therefore, has the potential to cool buildings and reduce the need for air-conditioning units, thus reducing a building’s carbon footprint.

Many hotter countries have been utilizing the technique of painting roofs or walls white to reflect the sun’s rays and generally keep a dwelling cooler. However, experts have been working to improve upon this idea, to both reduce carbon emissions even further and aid the efficiency of home cooling. For decades, researchers have been attempting to develop a highly reflective paint that can reflect enough of the sun’s heat to actively cool a buildings temperature to below the temperature of its surroundings.

According to The New Scientist ‘Xiulin Ruan at Purdue University and his colleagues developed a white paint that was so reflective and good at radiating heat that it cooled a surface to 1.7°C below the surrounding noon air temperature during tests in Indiana. Compared with existing, commercial heat-reflective paints that reflect about 80-90 per cent of solar energy, the new one managed 95.5 per cent.’

The paint’s success derives from the addition of different sized particles of calcium carbonate, which scatters the different wavelengths of the solar spectrum. New Scientist reported that:

‘Although it sounds counter-intuitive, the surface can be cooled below the surrounding temperature because it emits enough heat through radiative sky cooling, the natural process of a body under the sky – such as a roof – radiating heat out to space. Light-coloured surfaces regularly do this on cloudless nights, but it wasn’t until 2014 that we found a material that managed the feat in daylight, when our cooling needs are greatest.’

The paint has been developed with materials commonly used in the painting industry, hopefully making it a viable option for property owners. It is acrylic based, thinner, cheaper and easily produced according to the developers. However, it is not on the market just yet, the product still needs to be tested for long term reliability and efficiency, needing to jump a series of hurdles before it is commercially available. According to the developers, there are many manufacturers are already showing an enthusiastic interest in the product. The paint is hoped to have a large range of uses beyond just that of cooling buildings, such as cooling telecommunication equipment.

Ensuring that a building is energy efficient actually has a huge impact on the environment and the reduction of carbon emissions. The BBC reported: ‘according to the World Green Building Council, the lighting, heating and cooling of buildings is responsible for around 28% of global CO2. That’s because the heating and cooling of buildings is mainly powered by coal, oil and gas – In Europe, around 75% of this energy need comes from fossil fuels.’

If a building can remain sustainably and consistently cooler, less energy will be used to keep homes at a comfortable temperature. Not only will this produce less carbon emissions but will be of huge benefit to the bill payer. According to the USA’s Department of Energy, ‘three-quarters of all homes in the United States have air conditioners. Air conditioners use about 6% of all the electricity produced in the United States, at an annual cost of about $29 billion to homeowners. As a result, roughly 117 million metric tons of carbon dioxide are released into the air each year.’

Compared with existing heat-resistant paints, the developers estimate that for the typical home of 200 square meters, this paint could save the homeowner approximately $50 per month on cooling costs.

There are plenty of other means in which homeowners or landlords can ensure that their premises are energy efficient in terms of heating and cooling. Properly insulating a property will reduce the need for air-conditioning and heating units to work so hard to regulate the temperature. You could also switch to a green energy provider to ensure that your electricity is sustainably produced.