Blog - Latest News
You are here: Home1 / News2 / Science News3 / New Study Highlights The Impact of Loneliness on the Brain 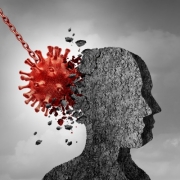 Despite the need to keep people safe and protected from the dangers of COVID-19, the social distancing and strict restrictions imposed on the elderly and vulnerable this year has undoubtedly led to a surge in loneliness and isolation. As reported by The Guardian, a poll of 2,100 adults in Great Britain commissioned by the British Psychological Society (BPS) found that 41% were worried about those close to them feeling isolated in coming weeks. Many families have been apart for the best part of a year, and with the announcement of a new, more infectious strain of coronavirus now in circulation, there appears to be no end to the distancing in the near future. Loneliness, isolation and depression can impact an individual both emotionally and physically and now for the first time, scientists have been able to show exactly what loneliness ‘looks like’ in terms of brain imaging.

Details of the study were published on 21st December on Science Daily and the work was led by a team of Canadian researchers at the University of Rochester. The study involved analyzing the MRI data, genetics and psychological self-assessments of around 40,000 people who were either middle-aged or older. They assessed the results of those who said they often felt lonely against those who said they did not. The participants had authorized their data to be available via the UK Biobank, which is essentially a shared database that allows health scientists across the globe to view and analyze their information.

The results indicated that those who had expressed that they felt loneliness regularly appeared to have noticeable and visible differences in their brains. It appeared that their ‘grey matter’ volume in the ‘default network’ area of the brain remained well preserved as was the ‘fonix’, a bundle of nerve fibers carrying information from the hippocampus (responsible for learning and memory) to the default network. The default network is responsible for our inner thoughts and this includes thinking about old times, planning what might happen in the future, running through different scenarios and thinking about how others may react to a situation. Scientists also observed that there were differences in the way the brain’s regions communicated with each other across brain networks.

The theory behind these differences is that because lonely people have less social stimulation, they tend to rely more heavily on either recalling memories from the past, or imagining social situations taking place in the future. These actions naturally draw on the memory-based functionality of the default network leading to more activity in these regions.

Understanding the impact of loneliness on a biological level is important for several reasons. One of the most notable is that some research has indicated that older people who experience loneliness appear to have a greater chance of developing conditions such as dementia and experiencing cognitive decline. In fact, one report suggested that social isolation was associated with about a 50% percent increased risk of dementia. It is currently unknown exactly why this link is so prevalent, and further research into this correlation is needed in order to help reduce loneliness in society and curb the development of dementia in a rapidly aging population.

Many people who are lonely are suffering in silence as they have simply fallen off the radar. As a society, there are many things that we can do to help tackle loneliness in our communities. COVID-19 has made it difficult to simply pop in and visit people, especially the elderly and vulnerable, but there are many other ways to maintain contact. From organizing zoom video calls, to a regular old-fashioned phone call or letter, maintaining contact does not have to be complicated, long-winded or time consuming. For many people, they may well go days or weeks without any interaction with another person, so receiving something as simple as a letter in the post could make a real difference to their emotional wellbeing.

In the bustle of life, we often get caught up in the noise and forget to check on on those who aren’t shouting the loudest, posting frequently on social media or bombarding us with endless WhatsApp messages. Consider your friends, family and connections who you’ve not seen or heard from recently and make an extra special effort to reach out to them and check that they are ok. You can even reach out to people you don’t know through the work of charities such as AgeUK – which offers a telephone befriending service. Alongside their partner charity, The Silver Line offers free telephone friendship services so people can enjoy chatting with someone over the phone, all from the comfort of their own home.

It is clear that loneliness is a major challenge in our society, but thankfully there are plenty of ways in which we can help to ensure that those around us are not left to battle on alone.

Film Releases To Look Out For in 2021