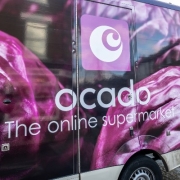 Online grocer and technology firm Ocado is being sued by a rival company from Norway over claims that it’s robot-operated warehouse technology has infringed their company’s patents.

Automated technology has continued to advance with pace, particularly in areas such as warehouse automation. It has been both a blessing and a curse, opening the way for greater efficiency and scale, but also leading to a mass cull of manual labor jobs. In fact, experts at analysis firm Oxford Economic have predicted that around 20 million manufacturing jobs globally could be replaced by robots by 2030.

The development of new technology and ideas may seem like a creative dream giving way to endless opportunities for business development and growth. However, inventors and companies are keen to wrap up their inventions in watertight patent and copyright legalities to prevent others from cashing in on their ideas without due credit or compensation. This is totally understandable when significant time, effort, resources and money have been put into coming up with the idea; it simply doesn’t make sense to leave the technology open for others to exploit freely, unless it was created from a truly altruistic place of course. It is no surprise therefore that according to Statista, the companies with the most granted U.S. patents includes International Business Machines with 9,262 patents, Samsung Electronics Co Ltd with 6,469, Canon KK with 3,548 and Microsoft Technology Licensing LLC with 3,081 patents.

Patent challenges are not uncommon particularly in the technology sector, with one source suggesting that the EPO handles around 4,000 oppositions each year. Now it appears that Norwegian firm AutoStore is the last company to mount a legal challenge for patent infringement, this time against Ocado.

AutoStore have filed lawsuits in the UK and the US with the intention of ‘barring Ocado Group Plc and its partners from manufacturing and selling infringing products and importing them into the United States’. In addition they are pressing for financial damages which experts believe could amount to ‘millions of pounds’. If upheld, the consequences for Ocado could be even more significant, as their future plans included rolling out their automated warehouse technology via a number of strategic partnerships. These include alleged agreements with retailers including Kroger, Marks & Spencer and Morrisons.

In a statement which appears on the AutoStore website, Karl Johan Lier, the company’s CEO and President said, “Since 1996, AutoStore has developed and pioneered technology that has revolutionized retail storage and order fulfillment, and is driving the growth of online retail. Our ownership of the technology at the heart of Ocado’s warehousing system is clear. We will not tolerate Ocado’s continued infringement of our intellectual property rights in its effort to boost its growth and attempt to transform itself into a global technology company.”

The connection between AutoStore and Ocado is a complex and interesting one, as there are claims from the former that Ocado is in fact one of their customers, having purchased Autostore technology in 2012. It is argued that its own storage system and robots makes up the foundations of the Ocado’s Smart Platform indicating that the company took inspiration from their technology in order to create their own product. The claims are based on the type of technology which is being used, in addition to the mechanisms inside the robots. According to the Autostore statement, the infringements relate to the ‘fundamental central cavity design of the AS/RS robots; the arrangement of the lifting mechanism that enables those robots to lift and place bins in their cavities; and the robots’ in-wheel motors.’

It has been reported that a court in Norway has already ruled in favor of Autostore with regards to its ownership of patients relating to the robots’ central cavity, but that Ocado has continued to seek out partnerships and sell the technology ‘as its own’.

Autostore is a successful company, supporting more than 500 installations and 18,000 robots over some 30 countries. It has established a presence in a range of markets, including grocery, healthcare and aviation. It also boasts an impressive customer base which includes ASAD, Best Buy and Lufthansa. It was founded in 1996 as Jakob Hatteland Logistics AS, AutoStore and has continued to retain its position as an innovative robotics technology company, known for inventing the pioneering ‘Cube Storage Automation’ which is considered the densest technology available for the warehousing and logistics industry.

At the time of writing this article, Ocado had indicated that they had not been notified of any legal action, but that they would fight any claims of patent infringement. Simultaneously, it’s share price fell by 5% in an apparent reaction to the allegations. Ironically, earlier in the week Ocado had actually overtaken Tesco as the country’s ‘most valuable grocery retailer on the UK stock market’.