Blog - Latest News
You are here: Home1 / Around The Web2 / Science3 / Power Lines May Mess With Honeybee Learning And Behavior 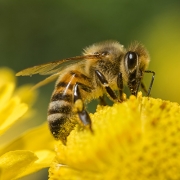 Honeybees play an essential role in agriculture, and might be affected by the electromagnetic fields of power lines.

Power lines could be messing with honeybees by emitting electromagnetic fields that can alter the insects’ behavior and ability to learn.

In the lab, honeybees (Apis mellifera) were more aggressive toward other bees after being exposed to electromagnetic fields, or EMFs, at strengths similar to what they might experience at ground level under electricity transmission lines, researchers report October 10 in PLOS One. Those exposed bees also were slower to learn to respond to a new threat than unexposed bees were.

“The reductions in learning are pretty concerning,” says Sebastian Shepherd. The entomologist worked on the new study at the University of Southampton in England before moving to Purdue University in West Lafayette, Ind. “These were bees that were very happy and healthy” before being exposed to EMFs in the study.

The finding may be one clue to help explain the recent and mysterious decline in managed U.S. honeybee colonies. The insects provide an estimated $15 billion in annual agricultural value by pollinating U.S. crops. But beekeepers reported that colonies last year experienced their worst winter die-off in more than a decade (SN: 6/20/19). And in preceding years, some colonies’ worker bees simply vanished (SN: 1/17/18).

Researchers believe the problem isn’t due to a single cause, but instead multiple stressors including getting jostled during a cross-country move to new farm fields or flying through fields laced with pesticides. Power lines, it turns out, might also be stressing bees out. Altogether, stressors could be weakening bees so they’re less capable of surviving disease or extreme weather, Shepherd says.

The new study builds on research published by the same group in May 2018 in Science Advances that found that bees fed and foraged less when they had to fly through EMF levels of 100 microteslas (µT) to get to a food source. That’s the maximum EMF level experienced at ground level beneath a power line. The 2018 study also found that EMF levels as low as 20 µT affected some bees’ ability to learn.

In one test, bees were familiarized with a floral smell. The bees were then put through five trials in which they were exposed to the smell for several seconds before experiencing an electric shock. The researchers measured how many trials it took the bees to learn to defensively extend their stingers in response to the smell instead of the stimulus.

“It’s basically Pavlov’s dogs with bees,” Shepherd says. At both EMF levels, exposed honeybees were slower than unexposed bees in learning to associate the smell with the shock. Only a third of the exposed bees learned to do it after the five trials, compared with half of the unexposed bees. Exposed bees also were more likely than unexposed bees to exhibit aggressive behavior, such as biting or attempting to sting other bees.

While the findings weren’t surprising to pollinator ecologist Stephen Buchmann of the University of Arizona in Tucson, he notes that it’s unclear whether impacts measured in the lab translate to what’s going on in the field.

Kimberly Russell, an ecologist at Rutgers University in New Brunswick, N.J., studies wild honeybee abundance within power line corridors. Power companies maintain millions of hectares of open fields beneath their transmission lines to keep vegetation from interfering with power flow. These transmission corridors provide sunny, open fields of wildflowers that attract bees. In fact, there are more wild bees, and a wider variety of bee species, buzzing around these habitats than in nearby forests, a July Biological Conservation study found.A healthy habitat full of diverse floral food could make up for ill effects caused by power line EMFs by reducing the overall amount of stress that the bees are under, Russell says.