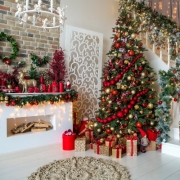 It can be safely said that many will be glad to see the back of 2020. So as we draw to the end of what has been an extremely difficult and challenging year, it is no surprise that record numbers of people have opted to put up their Christmas decorations a bit earlier than usual.

As Coronavirus continues to impact the lives of people across the globe, this Christmas is likely to see many families remaining apart due to restrictions of mixing households and the risks posed to elderly or vulnerable members of the family. Without the much anticipated family gatherings, the Christmas parties with friends and the lack of New Year celebrations, many are desperate for a much needed pick me up, and what better way to boost your spirits than with a touch of Christmas magic around the home?

You only need to take a look at your Facebook or Instagram feeds to see the beautiful images of stunning Christmas trees, festive home decor and mesmerizing outdoor lighting. Some have opted for more subtle additions whilst others have gone the ‘whole hog’ and covered every inch of their property in flashing fairy lights, like something out of the classic movie ‘Deck the Halls’. What started as humors exasperation at those who had put their trees up in weeks in advance has now become more widely adopted as the perfect way to bring a little more magic to the remaining weeks of the year.

Traditionally, Christmas decorations were put up any time after the ‘first day of advent’ which would be the 1st December. Others prefer to wait until the 12 days before Christmas and there are those who wait until as late as Christmas Eve! Certainly in the U.S. it is custom to wait until Thanksgiving is over before turning their attention to the festive decor, but that hasn’t stopped folks from getting in on the action ahead of time.

Naturally, there has been support from the celebrity community with Queer Eye star Tan France put his tree up on the 1st November in what he described as a 10 year Halloween tradition. Dame Joan Collins was also pictured on Instagram on the 10th November next to her dazzling Christmas tree with a glass of bubbly in hand. Actress January Jones was also pictured by her fireplace which was adorned with Santa’s and stockings on the 1st November.

But it isn’t just celebrities that are putting up their decorations prematurely. In the U.K. after Prime Minister Boris Johnston announced a second national lockdown for the duration of November, many people decided to make the most of the situation by putting their decorations up a whole month earlier than usual. With the children missing out on so much this year, it seems fitting to let them start feeling the excitement and anticipation of Christmas for a few weeks longer this year. And now that the new three tier system has been announced in the U.K. starting on the 2nd of December, a number of cities will be facing the strictest of lockdowns which includes no mixing with other households and the closing of certain businesses. The U.K. government has announced that a 5 day ‘grace period’ will be granted over the Christmas period to enable 3 households to meet over Christmas, but this doesn’t detract from disappointment of spending the coming weeks confined largely to their homes.

It has been thought that putting up your Christmas decorations early does in fact have psychological benefits. In a recent article for Good Housekeeping, Heather Garbutt, psychotherapist and director of The Counselling & Psychotherapy Centre said, “Whichever Christmas decorations you like – whether it’s fairy lights, table decorations, trees or candles – can form a buffer against a world that is pretty tough at the moment. Doing your favorite Christmas things earlier will remind you of the simple joys and pleasures of being human.”

Marsha Chinichian, the resident clinical psychotherapist at Mindshine agrees that said, ““Decorating early really isn’t a bad idea at all. Studies show that decorating for the holidays improves mood and ignites positive memories. Not to mention the fact that the actual act of putting Christmas decorations up offers a boost of your happy hormone, dopamine. Holiday decorating ignites the child in each of us, eliciting positive emotions.”

And interestingly, it could be good for boosting a sense of community spirit too. A study reported in Better Homes & Gardens revealed that when people were shown houses adorned with Christmas decorations, they were considered more friendly and sociable than those whose houses were lacking in the decor department. They were seen as more ‘open’ and accessible even if those surveyed had never actually interacted with them very often.

So really, it doesn’t seem that there are any bad reasons for injecting a little festive magic into your home a little earlier than usual. After all, this year has been far from normal.

‘All Kids Deserve A Proper Education’: How Combating Educational Inequality...