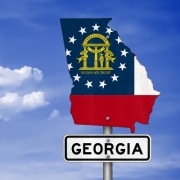 Joe Biden has been confirmed as the first Democrat to win the state of Georgia since Bill Clinton in 1996 after a hand recount has been completed. The president-elect picks up the state’s 16 electoral votes on his way to a projected election victory of 302-232.

Election officials have said that the recount reaffirms Biden’s victory, while the Associated Press called the race Thursday evening following the announcement of the result. The recount resulted in election officials discovering an extra 5,800 votes across four counties. Trump actually gained ground on Biden due to the recount – around 1,400 votes – but it was not enough to trouble the overall result.

Brad Raffensperger, the Georgia secretary of state, announced that the recount was completed as a result of human error and that there was zero evidence of widespread voter fraud or rigging.
“Georgia’s historic first statewide audit reaffirmed that the state’s new secure paper ballot voting system accurately counted and reported results,” he added. “This is a credit to the hard work of our county and local elections officials who moved quickly to undertake and complete such a momentous task in a short period of time.”

“The recount process simply reaffirmed what we already knew: Georgia voters selected Joe Biden to be their next president,” said Jaclyn Rothenberg, the Biden campaign spokeswoman, in an email to the Associated Press.

“We are grateful to the election officials, volunteers and workers for working overtime and under unprecedented circumstances to complete this recount, as the utmost form of public service.”

Despite the result of the recount in Georgia and the ensuing announcement from the Associated Press, Donald Trump continues to refuse to concede the race, instead choosing to contest and argue against results in a number of key states, including Georgia. Trump’s team continues to demand recounts or certification delays while the president continues to make unfounded assertions about mass voter fraud.

“Almost ZERO ballots rejected in Georgia this election. In years past, close to 4%. Not possible. Must have signature check on envelopes now. Very easy to do. Dems fighting because they got caught. Far more votes than needed for flip. Republicans must get tough!” Trump tweeted after the Georgia recount result was announced.

The recount did not come about as a result of any suspicion of voter fraud, rather than from an audit required by a new Georgia law. The Republican Georgia secretary of state said that it made sense to audit the presidential race because of its significance and the tight margin separating Biden and Trump.

Top Georgia voting system official Gabriel Sterling announced before the result of the recount was released that the previously uncounted ballots in four counties across the state would reduce Biden’s victory margin from around 14,000 to around 12,800.

Results certified and submitted by the various counties throughout Georgia will be recertified by the state by Friday. The losing campaign, in this case Trump and the Republicans, has two business days after this to request a further recount, as long as the margin remains within 0.5%.

“The president way ahead on election night, seven or 800,000 in Pennsylvania, somehow he lost Pennsylvania. We have statisticians willing to testify that that’s almost statistically impossible to have happened in the period of time that it happened. But, of course, that’s just speculation,” Trump’s lawyer Rudy Giuliani said during a Trump legal team press conference on election fraud and their plans going forward.

“This pattern repeats itself in a number of states. Almost exactly the same pattern, which to any experienced investigator, prosecutor would suggest that there was a plan from a centralized place to execute these various acts of voter fraud, specifically focused on big cities and specifically focused on, as you would imagine, big cities controlled by Democrats, and particularly focused on big cities that have a long history of corruption. The number of voter fraud cases in Philadelphia could fill a library.

“Just a few weeks ago, there was a conviction for voter fraud and one two weeks before that. And I’ve often said, I guess, sarcastically, but it’s true, the only surprise I would have found in this is that Philadelphia hadn’t cheated in this election, because, for the last 60 years, they’ve cheated in just about every single election. You could say the same thing about Detroit,” Giuliani said.

“Each one of these cities are cities that are controlled by Democrats, which means they can get away with anything they want to do. It means they have a certain degree of control over… certainly control the election board completely. And they control law enforcement. And unfortunately, they have some friendly judges that will issue ridiculously irrational opinions just to come out in their favor.”

December Flights Canceled To UK And Europe
Scroll to top