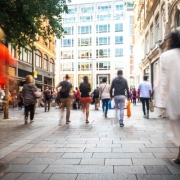 After the coronavirus spread from Wuhan and became a nationwide pandemic, the United Kingdom was forced to go into a nationwide lockdown in March after an overwhelming number of cases. After the rate of infection decreased, the UK government began to slowly lift restrictions from June onwards. Towards the end of August and the start of September however, cases began to rise again rapidly, as the UK entered a second wave. As of the 15th of October the daily case rate was 18,980, up 1440 from the previous week, and the daily death figures at 138. Some argue that the sharp rise in cases in the UK is due to increased testing capabilities, a feat that the UK government was unable to implement swiftly early in the pandemic. Whether, testing capabilities mean that the daily figure is similar to that at the start of the UK lockdown or not, the surge of cases has meant that restrictions are once again being put in place across the United Kingdom.

As cases have risen, Britain’s government have put in places new restrictions. Locking down local areas, limiting the social gatherings to six persons by law and shutting pubs and restaurants at 10pm. These procedures have been criticized by many as confusing and not doing enough to combat the virus. The government’s scientific advisory board have apparently advised different methods to combat the virus. In example, the UK government has allegedly been urged to put in place new restrictions or instigate a short, sharp lockdown, otherwise known as a ‘circuit breaker’ by scientific advisors. The circuit-breaker plan was apparently put to parliament three-weeks ago but was rejected.

Instead, the government has now introduced a three-tier regional system of COVID restrictions across the country, similar to traffic light systems in place in other countries. The tiers in this alert system include: Medium, High and Very-High, with the whole of the UK starting on a Medium tier due to the level of nationwide outbreak. Each of these tiers have their own restrictions:

Tier 1, Medium – The rule of six when meeting indoors or outdoors is in place and pubs and restaurants are required to shut at 10pm.

Tier 2, High – No households are allowed to mix indoors, Rule of six applies outdoors and again, pubs and restaurants will shut at 10pm.

Tier 3, Very High – Further measures may be implemented by local authorities but blanket rules include: No household mixing indoors or outdoors, privately or publicly. Rule of six now applies to outdoor public spaces such as parks. Pubs and Bars will close unless they serve food, some facilities will need to close and restrictions for travelling in and out of the area will apply.

According to The Guardian, when the new system was implemented in early October, ‘Some 28% of England’s population are in tier 2, while 3% are in tier 3…’ The city of Liverpool is the first to be placed in the Tier 3 or ‘very high’ category after the North of England has suffered from a significant number of cases, the majority of the North of England will be under High restrictions.

Local authorities have been given the power to tighten restrictions if they feel it is necessary and prudent to do so. In places like Liverpool where the highest restrictions have been applied, wedding receptions have been banned and the government has also advised that people should avoid staying overnight in the area.

The rest of the UK is under medium restrictions as standard, with businesses allowed to remain open with the usual level of social distancing requirements – such as face masks, handwashing, two-meters apart and so forth. Those that can work from home have been urged to do so. Areas are normally given notice before it enters into a higher tier, for example London, alongside other areas have been told they will enter Tier Two on the 17th of October.

The Prime minister’s reasoning for the plan was that it would “avoid the misery of a national lockdown”. Stating: “I rule out nothing of course in combating the virus, but we are going to do it with the local, the regional approach that can drive down and will drive down the virus, if it is properly implemented.”

The Guardian reported: ‘The tier system will reportedly be based on the local rate of infection, although the rate of increase might also be taken into account, along with the total number of cases. Johnson said that areas in tier 3 will be those where infection rates are rising rapidly and “where the NHS could soon be under unbearable pressure”.’

CDC Guidelines: How To Stay Safe Over Thanksgiving
Scroll to top