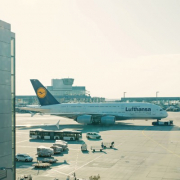 Food and other vital supplies may be in short supply due to disorder at the UK-French border.

The airline has said that it was carrying 80 tons of food from Frankfurt to Doncaster-Sheffield Airport, northern England, on a Boeing 777 freighter. Nearly 3000 lorries remain stuck in Kent, the south of England, despite attempts being made to re-start cross-Channel access from Dover. The airline also said that it was working with a freight forwarder to supply food from Egypt and elsewhere to supermarkets such as Tesco (TSCDY), Sainsbury’s (JSAIY) and Aldi.

France shut its border with the UK on Sunday for 48 hours in an effort to stop the spread of a highly transmissible new strain of Covid-19, found in the UK. Supermarket chains and other businesses in the UK have struggled to cope with the impact of the closure of the essential freight routes between southern England and France.

“Lufthansa Cargo is currently examining whether additional special cargo flights can be offered during the next days. We are also checking if a regular flight might be possible,” a spokeswoman told the BBC.

“This could be with a freighter, but we are also examining if we could use passenger aircraft for freight flights only,” she added.

Despite France and the United Kingdom agreeing late on Tuesday to reopen ferry ports and the Eurotunnel rail link, at least 3000 trucks remained grounded Wednesday morning due to drivers waiting for negative Covid-19 results, needed in order to travel.

Doncaster-Sheffield Airport said in January, the “planned increase” in the number of flights of perishable goods had risen from three a week to eight.

The airport will be trying to operate 700 tons in food freight a week, a significant increase from 300 tons a week. However, the airport has stated that this increase was actually down to companies wanting to mitigate the expected Brexit congestion, rather than the current issues at the border in Dover, southern England.

“We have seen a general increase in freight traffic in the period since the pandemic began in March by around 40% year-on-year,” a spokeswoman said.

“We are currently experiencing a large volume of enquiries for flights as a result of border closures and we are handling additional flights, such as today’s, where possible. Naturally, this is already a busy period for the air-freight sector as a result of Christmas and Covid.”

In response to the closure of the Port of Dover and Eurotunnel, some firms have been chartering private aircraft in order to carry out the movement of goods such as food, textiles and livestock.

Leading UK supermarkets, Tesco and Sainsburys, have warned previously this week that they may begin to run out of fresh items such as lettuce, salad leaves, broccoli, cauliflower, and citrus fruits within days, subject to the issues at the port being resolved. This may also result in notable supply chain problems in January if there is an extended period in which distribution is blocked.

Despite France giving the green light for travel from the UK to resume, the International Road Transport Union warned that testing truck drivers will cause significant delays.

“We don’t think testing will work. The backlog can’t be cleared if the tests take 30 minutes per driver,” said Raluca Marian, the union’s general delegate to the EU.

“I hope HGVs [Heavy Goods Vehicles] will be crossing the Channel this morning, and so the position will start to gradually improve, but I think it will take time,” UK Housing Secretary Robert Jenrick said. Speaking to Sky News, he said he does not dispute that delays have caused issues for the supply chain but asserted that there is “no material shortage of food.”

Andrew Opie, director of food & sustainability at the British Retail Consortium, warned on Wednesday that some shortages could worsen.

“It is essential that lorries get moving across the border as quickly as possible. Until the backlog is cleared, and supply chains return to normal, we anticipate issues with the availability of some fresh goods,” he said.

The Food and Drink Federation, which represents manufacturers, said it could take until the new year for the problems to be resolved. “That means we are likely to see, locally, reduced on-shelf availability of some fresh vegetables and fruits, beginning next week. We will also see potential significant disruption to the flow of ingredients into the UK,” said Ian Wright, the federation’s chief executive.

Currently Britain imports nearly half of its fresh vegetables and the majority of its fruit, predominantly from the EU.

The UK has previously looked to other sources when fresh produce has been under threat. For example, in 2018, thousands of iceberg lettuce were transported from Los Angeles to the UK due to a heat wave in the summer, increasing the demand for salad. The hot weather also meant that it became difficult to grow lettuce.