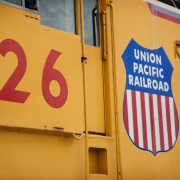 Union Pacific Corp, one of the largest freight railroad operators in the US, has this week reported better-than-expected quarterly profits due to increased shipping volumes. However, shares in the company fell by over 4% as concern arises that the growth will moderate with a slow vaccine rollout.

Bolstered by higher shipping volumes of grain, refrigerated food and drinks, and retail goods, Union Pacific were able to announce a 2020 fourth quarter net income of $1.4 billion, or $2.05 per diluted share.

“These outstanding results demonstrate the true potential of our franchise as we leveraged all three profitability drivers simultaneously – volume growth, productivity, and pricing – to produce record fourth quarter results,” said Lance Fritz, Union Pacific chairman, president, and chief executive officer. “The women and men of Union Pacific persevered throughout the pandemic to provide our customers with a safe, reliable, and consistent service product.”

Despite the company’s reporting of profit, shares fell by 4.3% to $208.85 in midday trading because of a growing concern that the current pace of volume growth and efficiency gains could slow as a slow vaccine rollout threatens an economy already drowning under the weight of the Covid-19 pandemic.

“All of that all raises some questions,” Edward Jones analyst Jeff Windau said.

Officials at Union Pacific, which transports goods in and out of busy seaports in western states such as Texas and California, have stated that they expect 2021 volume growth of 4-6%.

Executives have warned, however, that such a forecast depends on a successful Covid-19 vaccine rollout, among other factors.

Analysts are predicting the recovery in US railroad volumes to continue through 2021, with an increase in demand likely giving way to broader-based gains in rail traffic, caused by increased demand for wood products for home constructions, grains for biofuels and export to China and goods sold vie e-commerce.

“While the economic outlook for 2021 remains uncertain, we will build off our solid 2020 performance to produce continued strong productivity through operational excellence. We expect our enhanced service product will support both solid core pricing gains while also increasing our share of the freight transportation market,” Fritz said. “Our confidence in our ability to drive value for all of our stakeholders has never been greater.”

Elsewhere in the world of business, Lufthansa CEO Carsten Spohr revealed this week that the firm is losing 1 million euros ($1.2 million) every two hours, a ‘significant improvement’ on the low point of the Covid-19 crisis according to the executive.

The German airline was posting losses of double that amount at one point last year and has since cut costs and pared back flights to those generating profit, thanks to buoyant cargo rates, Spohr said in a webcast interview hosted by Eurocontrol.

Last year the group received a bailout from the German government of 9 billion euro, with a 20% stake going the other way. According to Spohr, Lufthansa has so far used around a third of its cash injection and may end up not needing the full amount.

Spohr also revealed that his firm may start selling tickets for as cheap as $9 should the company need to operate empty flights to keep hold of airport slots. Airlines typically need to utilize at least 80% of their designated slots in order to keep them. During the pandemic, this has been a problem for many carriers and some have started to send off ghost flights to keep hold of their slots.

“Any airline like us who depends on the hub system will do whatever it takes to safeguard their slots. If we have to fly empty, we’ll probably offer nine-euro tickets ourselves to keep those flights in the system… Giving up essential slots at a hub is a damage to generations of Lufthansa staff or Air France staff or British Airways staff or KLM staff to come.

“On the one hand, European Commission wants to reduce the CO2 footprint. On the other hand, if they would force us to fly empty, that’d be crazy. I think it would be public very quickly.
That’s why I’m still optimistic that the slot waiver one way or another will be extended.”

Spohr has also spoken recently on the future of air travel and the continuing impact of Covid-19.

“Personally, I assume that in the future every passenger on certain intercontinental routes is either tested or vaccinated,” Lufthansa CEO Carsten Spohr told the Welt am Sonntag newspaper
“We assume realistically that in the middle of the decade we will have up to 10% fewer passengers as in the pro-coronavirus times,” he said.

Florida Official Wants 2021 Olympics To Take Place In His State Amid Cancellation...