Blog - Latest News
You are here: Home1 / News2 / Science News3 / Will The United Kingdom Go into a Second Nationwide Lockdown? 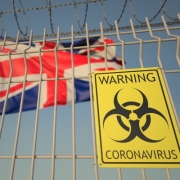 The United Kingdom is currently facing a rapidly growing surge of coronavirus cases. Since mass testing began, on the 24th of September, it was reported that the UK saw the highest single daily rise in cases within 24 hours. Within this period 6,634 people tested positive for the disease, which was an approximate 25% rise in one day according to the BBC. According to official graphs, the United Kingdom is approaching a similar peak as it did in the first wave in March. Recently, the UK coronavirus alert level moved from 3 to 4. Meaning that, out of five levels in the stages of the outbreak, the UK is currently at a ‘high or exponentially rising transmission rate’. The UK government has enforced several new restrictions in order to attempt to slow the rise of cases. However, as things rapidly escalate many more are questioning whether the country should or will go into a second lockdown.

Experts quantify that although official records show that the UK has recently seen the highest number of new cases on a single day, the UK’s prior limited testing capabilities meant that records were perhaps not entirely accurate during the first peak of the pandemic. Some estimations suggest that there may have been as many as 100,000 cases a day at the peak. However, the UK is currently facing a deficit of available coronavirus tests and therefore current figures may still be slightly inaccurate. Some sources even suggest that the UK may only be identifying approximately 50% of cases at this time. Concern arises as both hospital admissions and death rates are also rising with the number of cases. If the National Health Service (NHS) becomes overwhelmed with the hospital admissions the coronavirus will become out of control for the country.

The government has advised the public that it is doing everything it can not to place the country in a second lockdown, in order to preserve jobs, livelihoods and the economy. In another speech addressing the nation on the 22nd of September, Prime Minister Boris Johnson stated:

‘And if we were forced into a new national lockdown, that would threaten not just jobs and livelihoods but the loving human contact on which we all depend.

It would mean renewed loneliness and confinement for the elderly and vulnerable, and ultimately it would threaten once again the education of our children. We must do all we can to avoid going down that road again.

But if people don’t follow the rules we have set out, then we must reserve the right to go further. We must take action now because a stitch in time saves nine; and this way we can keep people in work, we can keep our shops and our schools open, and we can keep our country moving forward while we work together to suppress the virus.’

Therefore, should the new restrictions put in place not prove to be effective it has been suggested by the UK government that they would take further action which could mean another lockdown for the country. The ‘tougher measures’ that have been newly placed in correlation with the Prime Minister’s speech include urging those that can work from home to again do so, stricter measures for face coverings, pub and restaurant curfews of 10 pm with strict table service and banning groups of over six persons. Businesses that are not COVID secure could be shut down, and those that do not generally comply to measures could face fines of up to £10,000. The government has suggested that these new restrictions could be in place for as long as six months. As the UK moves into its colder winter months and ‘flu season’ approaches, experts and Members of Parliament alike are concerned that this will bring an even greater increase in cases. Many have argued that the government’s current restrictions do not go far enough to contain the virus considering the current sharp rise in cases.

Some areas of the UK are seeing heavier increases than others – the north-east of England is currently facing separate and targeted restrictions due to an outbreak. Already, some cities and areas have been placed in local knockdowns as virus containment has got out of control. Britain’s capital city, London has also seen a sharp rise in cases and reports that a lockdown is being considered are beginning to circulate. According to Business Insider ‘Sadiq Khan, the mayor of London, warned on Wednesday that London was facing “additional measures” to try and contain the spread of the virus. “It is clear that London has unique needs and challenges and additional measures need to be examined which are suitable for the capital,” said a spokesman for the mayor.’