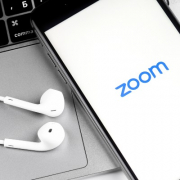 Zoom has played a somewhat integral part in our lives during the majority of 2020 and the ongoing coronavirus pandemic – from staying connected with loved ones to running businesses – video conferencing has carved out an integral role in COVID life. According to Market Watch, the tech company made as much money in three months (May, June, July) as it did in all of 2019, and stocks are skyrocketing. Going from a somewhat popular videoconferencing software to a heavily-relied upon cultural staple within a few months, as synonymous with video conferencing as ‘hoover’ is with vacuum cleaners. According to app tracking firm, Apptopia, on the 23rd of March Zoom was downloaded 2.13 million times around the world. Now, as the Christmas period is upon us, at a time where safety restrictions will keep many apart, the tech company has announced that it will lift its 40 minute call limit for free users, so that more people can easily enjoy the festive period with loved ones.

In the announcement, the company stated: “Covid-19 has changed how we live, work and celebrate in 2020, and like everything else this year, the holiday season doesn’t look the same. As a token of appreciation to our users during an extraordinary time, we’re removing the 40-minute limit on free Zoom accounts for all meetings globally for several upcoming special occasions. Whether coming together on the final day of Hanukkah, celebrating Christmas, ringing in the new year or marking the last days of Kwanzaa, those connecting with friends and family won’t get cut short.”

During this period the firm urged customers to follow security practices, such as using meeting passcodes to keep calls secure, not sharing meeting IDs publicly, such as on social media and enable waiting rooms to protect users from uninvited guests. These limits were also lifted in America over the Thanksgiving period.

In countries such as the United Kingdom, where restrictions over Christmas have been eased but are still limited, the option of virtual meet-ups will be a welcome life-line for many. Even though the easing of restrictions has meant that some will be able to gather in smaller numbers, it is still urged that you keep in-person social interactions at a minimum to avoid transmission and the devastating effects of COVID-19 to families.

In an article from The Guardian, Stephen Reicher, a professor of social psychology at the University of St Andrews, hoped that others would follow in Zoom’s example and the UK government and other companies would use such incentives to encourage people to refrain from in person socializing. “They could ask various sectors (especially those that have done well in the pandemic) to help out in a whole series of ways – say give the latest games to young people asked to self-isolate. The problem then – and I speak as the father of a 16-year-old – would be ever to get them out of their rooms rather than trying to keep them in. Or, say, free connection over Christmas so everyone can keep in touch as much as they like without data limits.”

Others have echoed this sentiment, as although videoconferencing and tech companies have kept many of us afloat, it has also revealed a massive technology disparity in countries such as the United States of America and the United Kingdom. Showing that there are thousands of people that are not able to afford the technology required for video-conferencing, or have suitable access to the internet and therefore would not be able to take advantage of digital socialization. Many have therefore called on local governments and companies to address the tech-disparity, which is seen as more urgent than ever in light of the coronavirus pandemic.

Sadly, the vast technology disparity has particularly been seen in schools where some children have been unable to keep up with virtual learning, due to the lack of hardware, software or suitable broadband. Other children whose parents have a higher income have not had this issue, but it has shown that many are at a severe disadvantage when it comes to technology access. Reforms in the internet and technology sectors have been called for, to address these issues.