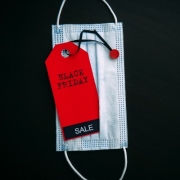 Companies around the world have been struggling to stay in the black this year thanks to the closure of industries in an attempt to stop coronavirus. So it is understandable that this year’s Black Friday shopping event is a cause for celebration for many.

However, it has been suggested that the environment will suffer dramatically thanks to the increase in vehicle emissions as shoppers head out to get their bargains.

And even those who are shopping online will also create an issue due to the increase in delivery vehicles that will be on the road. This year has already seen a huge boom in online retail with many shoppers forced to stay home, however with the holiday season coming up Black Friday is expected to be the biggest for several years.

Each delivery that is made will generate carbon dioxide meaning emissions will increase. And because the demand for products will be in a restricted period of time – despite many online retailers doing Black Friday Weeks – many companies will have to employ extra drivers, many of which will be using their own vehicles. While this is great for our economy there is no guarantee that the private vehicles will be as eco-friendly as some delivery companies’ vehicles are.

Experts have also confirmed that because many outlets provide same-day delivery there is often less time to put together a route that is more efficient both time and energy wise. To help combat this problem consumers are being asked to be patient and book the delivery slot that is closest to them logistically.

A recent survey by price comparison Money.co.uk has revealed that 21 per cent of those questioned would expect their delivery to be cheaper while 55 per cent thought it would be the same. Only 3 per cent believed the delivery charges would increase. However the remaining 21% admitted that they did not take delivery fees into account when placing their orders.

The survey continued to highlight the fact that while 85% of those polled confirmed they would be searching for Black Friday deals, only ten per cent recognized that there would be an impact on the environment.

As part of the survey, delivery companies were ranked depending on how they dealt with carbon emissions. The postal service was naturally the most carbon-conscious because of its ‘feet on the street’ system.

Many companies offer a ‘click and collect’ service for those who are happy to head to their local store to collect their parcels including Amazon who have been praised for reducing their number of home deliveries. They were also praised for pushing customers into local businesses as many who collect their parcels purchase something while in the shop, therefore putting more money back into the economy.

There are also companies that have opted to use either hybrid or electric vehicles, such as UPS, who were crowned the number one company for making their vehicles more environmentally friendly.

Despite the survey and the concern, some experts have said that they are unable to predict how much of a carbon dioxide surge there would be as the increase in online shopping meant less traffic heading to our town centers and shopping malls.

Leeds University Professor Greg Marsden confirmed, “The Black Friday problem is that retailers are created a huge peak in demand which needs to be met immediately. There’s the same issue with deliveries of chocolates and flowers when it comes to Mother’s Day.”

Meanwhile visiting professor Stephen Joseph from the University of Hertfordshire said, “When it comes to measuring traffic, there’s loads of data on cars. But we can see with our own eyes that many vehicles on the road are vans – they need to be researched better and given more prominence in policy.”

A study by credit card company Visa showed that during the first lockdown in the UK 89% of consumers did their shopping online, which include 31 per cent using the system for the first time. Out of those who were already online shoppers around 40 per cent admitted they were using the internet more often, a habit that 74% admitted they would continue to do.

Companies who sold their products online saw record sales this year including Amazon who saw their net profit virtually double compared to 2019 to $5.2 billion, making them one of the most successful online companies of 2020.

This figure was despite the company investing $4 billion on “incremental Covid-19 related costs in the quarter (Q2) to help keep employees safe and deliver products to the customer”.

The profits have been scorned by many in the media however the increase in sales has also meant an increase in jobs – it was estimated that the online giant had employed an extra 175,000 employees within a three-month period – meaning the company was helping local economies.

Taylor Swift Calls Out Scooter Braun For Selling Her Masters In $300 Million...

“Lockdown” Named Word of The Year in The UK By Collins Dictiona...
Scroll to top