Blog - Latest News
You are here: Home1 / News2 / Culture News3 / Books To Curl Up With in the Spooky Season 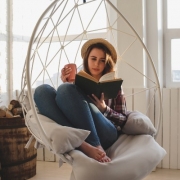 With coronavirus still looming like our very own villain in a horror dystopia, it seems that many of us will be spending the majority of October indoors. That does not mean however, that we cannot celebrate Halloween curled up, under a blanket with a great book, (themed appropriately of course). From Gothic Horror to supernatural Thrillers, stories about witches or ghosts – there are plenty of books out there to meet your Halloween needs from the newly released to the classics that should be in your horror repertoire.

The Year of the Witching by Alexis Henderson
Described as a ‘The Handmaid’s Tale meets The Village in this stunning feminist debut’ Alexis Henderson’s first novel tells the story of a women finding her power in a puritanical society. Amazon summarizes: ‘In the lands of Bethel, where the Prophet’s word is law, Immanuelle Moore’s very existence is blasphemy. Her mother’s union with an outsider of a different race cast her once-proud family into disgrace, so Immanuelle does her best to worship the Father, follow Holy Protocol, and lead a life of submission, devotion, and absolute conformity, like all the other women in the settlement. But a mishap lures her into the forbidden Darkwood surrounding Bethel, where the first prophet once chased and killed four powerful witches. Their spirits are still lurking there, and they bestow a gift on Immanuelle: the journal of her dead mother, who Immanuelle is shocked to learn once sought sanctuary in the wood.’

Devolution by Max Brooks
If you loved Max Brook’s World War Z, you may love this book too. Released this year, this is one of the newest instalments from the acclaimed writer and became a New York Times bestseller. Although some suggest that this book holds metaphors nodding to the COVID-19 pandemic, it is not another Zombie novel. It does tell the chilling story of a fictional Sasquatch massacre, after freshly discovered journals of a massacre survivor, Kate, point to the notion that supernatural forces are at work. Penguin Random House writing: ‘Part survival narrative, part bloody horror tale, part scientific journey into the boundaries between truth and fiction, this is a Bigfoot story as only Max Brooks could chronicle it—and like none you’ve ever read before.’

Rebecca by Daphne DuMaurier
Due to be released as a film on Netflix ready for Halloween, starring Lily James and Armie Hammer, you could read this classic 1938 Gothic Horror novel by English author Daphne du Maurier in preparation. The plot ‘concerns an unnamed young woman who impetuously marries a wealthy widower, only to discover that he and his household are haunted by the memory of his late first wife, the title character.’

The Haunting of Hill House by Shirley Jackson
If you prefer to look to more classic novels, the Haunting of Hill House is a staple for any Halloween collection. Now accompanies by a Netflix TV series, your Shirley Jackson fix could last for the entirety of October. Waterstones summarises the book as thus: ‘Four seekers have arrived at the rambling old pile known as Hill House: Dr. Montague, an occult scholar looking for solid evidence of psychic phenomena; Theodora, his lovely assistant; Luke, the future inheritor of the estate; and Eleanor, a friendless, fragile young woman with a dark past. As they begin to cope with horrifying occurrences beyond their control or understanding, they cannot possibly know what lies ahead. For Hill House is gathering its powers – and soon it will choose one of them to make its own.’

If It Bleeds by Stephen King
Where would a horror reading session be without the presence of Stephen King? This year’s 2020 release from the master of horror is a collection of four previously unpublished short novellas. Perfect if you prefer short breaks into a fictional worlds, meaning that you can dip in and out of these horror stories throughout October. The short stories are entitled: “Mr. Harrigan’s Phone”, “The Life of Chuck”, “Rat” and includes a stand-alone sequel to The Outsider, entitled “If It Bleeds” which is the leading story in the collection and is summarized as thus:

“News people have a saying: ‘If it bleeds, it leads’. And a bomb at Albert Macready Middle School is guaranteed to lead any bulletin. Holly Gibney of the Finders Keepers detective agency is working on the case of a missing dog – and on her own need to be more assertive – when she sees the footage on TV. But when she tunes in again, to the late-night report, she realizes there is something not quite right about the correspondent who was first on the scene.”