Blog - Latest News
You are here: Home1 / News2 / Science News3 / China and The UK’s Opposing Views on Vaccinating Their Population 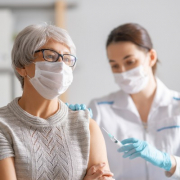 As new and more infectious variants of COVID-19 are identified across the world, it has become clear that 2021 will continue to be hampered by the devastating impacts of the virus. The approval of the Pfizer/BioNTech and Oxford/Astra Zeneca vaccines has meant that plans to implement mass vaccinations globally are now underway, giving countries the best chance of breaking the cycle of this unforgiving virus.

The UK has embarked on an impressive schedule for vaccinations, announcing that it is going to equip gps and local drugstores, alongside creating specialist vaccination centers and enlisting the help of the British Army to administer the vaccines. Speaking at a recent press conference, Prime Minister Boris Johnston said, ‘”We are rolling out the biggest vaccination program in our history, we have vaccinated more people in the UK than in the rest of Europe combined. By the middle of February if things go well, and with a wind in our sails, we expect to have offered the first vaccine dose to everyone in the four top priority groups identified by the Joint Committee of Vaccination and Immunisation.” According to the BBC around 100 Oxford million jabs have been ordered by the Government, and it is expected that over 40 million vaccinations will have been rolled out by March.

The approach by the UK government is designed to ensure that the most vulnerable are vaccinated first. This includes the elderly, those with existing health issues and key workers such as medical professionals and carers. Given that these groups are most likely to suffer more severe symptoms, this move will drive up immunity in these vital groups, thereby reducing the number of infections which result in hospitalization and easing the pressure on the NHS. Whilst this won’t drive down infections in younger people, as they are statistically more likely to have either mild symptoms or be asymptomatic, it is thought that this will ensure the NHS is not overwhelmed and that every seriously unwell person is able to access the treatment and equipment they need, when they need it.

On the flipside of this approach is China, who believe that the more ‘responsible’ approach is to vaccinate the working population and those with plans to travel. Their focus for a mass vaccination program centers on those aged between 18 and 59 years across 9 key priority groups. As reported by the Daily Mail newspaper, these groups comprise ‘customs inspection and quarantine officers for imported frozen food, international and domestic transport workers, and employees of government organizations, police, fire brigades and local communities. Staff in the logistics and public utility sectors are also included. So are those who plan to study or work overseas.’

The rationale behind this approach according to Hu Xijin, the editor-in-chief of a Communist Party-controlled newspaper in China called The Global Times, is that very few cases of the virus have been identified in elderly people in the region. He suggests that far more cases are occurring between younger members of the population who are more socially mobile, meaning that they are at increased risk of catching and spreading the virus. And whilst the West are pressing forward with vaccinations devised by Pfizer/BioNTech and Oxford/Astra Zeneca, China is proceeding with it’s own homegrown vaccine, Sinopharm, which has been reported to have an efficacy of around 78% based on late stage trial results in Brazil.

It should be noted that a one-size fits all approach could never work on a global scale. Each country has its own population dynamics, priorities and social structures, meaning that there are many variables in play when it comes to deciding on the best approach for mass vaccination. Such a predicament has not been faced by our species in over a century, so it is unsurprising that any approaches are viewed with some skepticism by certain other groups. What is clear is that mass vaccination appears to be the only way to overcome the relentless progression and mutation of the virus so that people can start to get back to some kind of normality.

Both the UK and China are aiming to vaccinate all of their key groups by mid to late February, which is no mean feat. In China this is to ensure people can take advantage of the popular new year travel and celebrations. Chinese New Year takes place on the 12th February, celebrating the start of a new year based on the lunar calendar. In the UK, February half term takes place around the 15th and all schools are currently closed until ‘at least’ this date. There is much pressure to ensure that schools can be reopened soon after this, given that pupils were unable to return to school for the period March through July in 2020 and now will be home-schooled again from January through Mid-Feb 2021. The race is now on, but only time will tell what the outcome will be.

How Keeping Your Home Smelling Fresh Can Enhance Your Overall Wellbeing