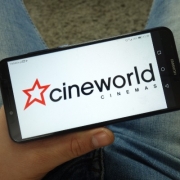 The closure of the movie industry during the ongoing global pandemic has left many businesses in the sector struggling, with many reducing their staff or turning away from ‘traditional’ ways to make money, and some have even closed completely.

The latest victim is Cineworld Group. The British owned company has become the second biggest cinema chain throughout the world, with more than 9,500 screens in 11 countries including America, Canada, parts of Europe and of course, the UK.

However the recent halting of all film production alongside the closure of their 790 sites has seen the debts of the company increase, making many unsure whether the company can survive.

With this in mind the company has employed AlixPartners to see if they can work through the vast amount of debt and put together a plan to move forward and rebuild.

It is not the first announcement for a cinema chain to seek financial help with a syndicate of Cineworld’s lenders also assigning Houlihan Lokey and FTI Consulting to discuss their $8bn of debt.

Cineworld are also working with global advisory focused investment group PJT Partners to go through all the options they could utilize to survive the worst crisis to hit cinemas in recent times.

The company was forced to close their theaters earlier this year however a brief respite saw some reopening after a few months. Recently the chain has had to close again with around 660 sites shutting their doors temporarily throughout both the US and the UK, resulting in shares in the company dropping significantly. The move has affected more than 45,000 employees, many of whom do not know if, or when, they will be able to return to their positions.

It is believed that the group could potentially create a form of insolvency to enable them to close some of their cinemas permanently as well as start talks between them and landlords to see if there could be any renegotiations. The company voluntary arrangement would also allow them to restructure their finances.

Although there has been a glimmer of hope for cinema operators with some movie theaters being able to reopen, the delay in major movie releases has been a key factor in the industry continuing to struggle.

While filming has been paused on several movies – and television shows – for most of 2020, it was hoped that movies that had seen their release dates postponed would be allowed to be shown soon.

However this does not seem to be the case with many still seeing their release dates pushed back and some studios opting to release their movies straight to pay per view television networks.

The latest James Bond blockbuster – No Time To Die – has seen its release date postponed from next month to April 2021 meaning those wanting to see Daniel Craig for the last time as 007 will have to wait even longer.

And with so many companies within the industry still unable to work properly it is unclear as yet whether there will be any job losses, and if so, how many. In the UK the government has encouraged those in the performing arts industry to retrain to another career in an attempt to get them back to work, a move that has been described as ‘condescending’ and ‘unrealistic’ with many wondering where employment will be found for the thousands of people who have lost their jobs.

Some movie theaters are continuing to find ways to remain in business with chains such as AMC Theaters recently announcing new offers they believe will help them stay afloat.

The theatre chain is offering film fans the opportunity to rent an entire theater for them and their family and friends, so long as they maintain all social distancing requirements as well as adhere to the cap of only 20 people.

The offer, starting at $99, sees movie goers opt for films from a list of 17 including new release Tenet, or golden oldies such as Shrek. You can also pay for extras including a microphone that allows you to introduce your guests over the PA system.

Other chains to have suffered during the crisis include Regal Cinemas who has made the announcement that they were closing their theaters indefinitely.

AMC has reopened around 500 of their 600 theaters across the country however the owners are questioning the ability to remain in business if the government does not offer them any financial support.

In New York the governor, Andrew Cuomo, has confirmed that movie theaters outside of the city have been allowed to reopen providing they stick to strict capacity limits and social distancing rules. Those who are seen to flout the rules could be hit with severe penalties, both legally and financially.

However many believe the entertainment industry could be forced to close their doors again due to the number of confirmed coronavirus cases increasing across the country.

How To Upgrade The Way You Wake Up In The Morning