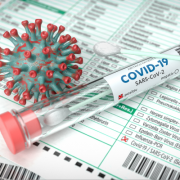 The English Premier League has received a record number of Covid-19 positive tests this week as fixtures continue to be canceled across the league. A number of officials at various clubs have suggested a ‘circuit breaker’ in order to attempt to stop the spread and allow the season to continue with less interruptions.

“The Premier League can today confirm that between Monday 21 December and Sunday 27 December, 1,479 players and club staff were tested for COVID-19,” an English Premier League statement said.

“Of these, there were 18 new positive tests. Players or club staff who have tested positive will self-isolate for a period of 10 days.

“The Premier League is providing this aggregated information for the purposes of competition integrity and transparency. No specific details as to clubs or individuals will be provided by the League and results will be made public after each round of testing,” it said.

Monday also saw Manchester City report numerous positive cases in their squad and staff, just days after striker Gabriel Jesus and defender Kyle Walker tested positive. The club’s training ground was closed in a precautionary move and the league made the decision to cancel Monday night’s fixture against Everton.

With players still testing positive, Manchester City’s training ground remains open and their game against Chelsea on Sunday remains in doubt, with Chelsea manager Frank Lampard saying he does not want to see the game go ahead if it is unsafe for either team.

“After the latest round of Covid-19 testing, the club returned a number of positive cases, in addition to the four already reported on Christmas Day,” a Manchester City statement read after news of the postponement was announced.

“With the security of the bubble compromised, there posed a risk that the virus could spread further amongst the squad, the staff and potentially beyond.

“Based on strong medical advice the Premier League, in consultation with both clubs, have decided to postpone the fixture.

“All positive cases involving players and staff will observe a period of self-isolation in accordance with Premier League and UK Government protocol on quarantine. The first team training ground at City Football Academy will close for an indeterminate period, with the squad and associated bubble undergoing testing before any decision is made for training to resume.

“Everyone at the club wishes all of our colleagues a speedy recovery ahead of their return to work, training and competition.”

Newly appointed West Bromwich Albion boss Sam Allardyce said he was in favor of a ‘circuit break’, claiming that he believes it would be the right thing to do to help the league deal with the outbreak.

“Everyone’s safety is more important than anything else,” he said after his side’s 5-0 home defeat by Leeds on Tuesday.

“When I listen to the news that the variant virus transmits quicker than the original virus, we can only do the right thing, which is have a circuit break.

“I am 66 years old and the last thing I want to do is catch Covid.

“As much as we’re getting tested – we had one positive this week – it seems to be creeping round. No matter how hard we try, no matter how many times we get tested, how we wear our masks, how we sanitize our hands, we’re still catching a lot infections round the country.

“If that helps [circuit breaker], let’s do it and let the season run a little longer when we get through it.”

The postponement is the second this season after an outbreak at Newcastle United earlier this month meant the league were forced to call off their match against Aston Villa. Ten of Tuesday’s Football League matches were postponed, prompting fears over the upcoming FA Cup third round fixtures in January.

Arsenal’s Brazilian defender Gabriel has tested positive for Covid-19, the club confirmed, meaning he will not be available for the next two fixtures. Southampton head coach Ralph Hasenhüttl was forced to miss his side’s home game against West Ham United after he had to self-isolate due to a positive result in his household.

Rochdale’s club doctor, Dr Wesley Tensel, who is also an NHS doctor, said it was vital that the UK’s soccer governing bodies look at the “bigger picture” and halt the campaign, temporarily at least.

“That is my feeling as a doctor. As a football fan I don’t want it to stop. But I am trying to see the bigger picture. A lot of people have been affected this year,” he said.

“Footballers traveling around the country are not causing spikes in different tiers but they can still pass it on to their loved ones because the football bubble they are in bursts every time they go home. There are consequences outside the pitch.”

A government source confirmed to the Guardian that there are currently no plans in place to change the guidance for elite sport across the country.

Increase in Travel Brings Surge in Covid
Scroll to top