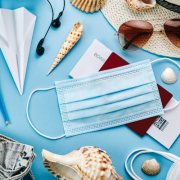 The massive increase in travel over the holiday period has brought fresh warnings from public health experts who believe the country should prepare for another increase in Covid-19 cases.

The Transportation Security Administration (TSA) confirmed that they had screened 1.28 million travelers throughout the country’s airports in one day, the highest number of travelers since the country went into lockdown in March. Although this figure is still around half as many as this time last year, more than one million people flew from American airports each day of the six day holiday period.

US infectious disease expert Dr Anthony Fauci spoke with CNN about his worries saying, “the reason I’m concerned and my colleagues in public health are concerned also is that we very well might see a post-seasonal, in the sense of Christmas, New Year’s, surge. And, as I have described it, as a surge upon a surge. Because if you look at the slope, the incline of cases that we have experienced as we have gone into the late fall and soon-to-be-early winter, it is really quite troubling.” He continued, “We are really at a very critical point.”

As a result it is believed that California officials will be extending the current stay-at-home orders in areas where health institutes are struggling to cope. Gov. Gavin Newsom has also expressed his concern over the potential of a new surge of cases, due to the holiday travel.

Although Newsom confirmed that some hospitals have seen their admissions plateauing, they were preparing to move into a ‘new phase’. Many schools, tents and arenas are being converted into makeshift hospitals however there appears to be difficulties with staffing them.

It has already been confirmed that San Joaquin Valley and Southern California intensive care units are at full capacity and Newsom has confirmed his stay-at-home orders will be implemented where ICUs have fewer than 15% capacity stating, “As we move into this new phase, where we brace, where we prepare ourselves for what is inevitable now … based on the travel we have just seen in the last week and the expectation of more of the same through the rest of the holiday season of a surge on top of a surge, arguably, on top of, again, another surge.”

Public Health Director Barbara Ferrer agrees saying, “The sad reality is that all indicators tell us that our situation may only get worse as we begin 2021.”

Meanwhile Dr. Mark Ghaly, State health secretary, continued to encourage people to stay home for New Year’s celebrations to try to curb an increase in cases throughout January. “Things that were, a month ago or two months ago, a low-risk activity today are really high risks because of the level of COVID that’s circulating in our communities.”

Further states have also seen an increase in cases. Both New York City and state confirmed there was a 7.07% positivity rate over a 7-day average over the Christmas period with many experts predicting that if the number of cases continues to increase as they currently are, deaths in America could reach 500,000 by the end of winter.

And with the new coronavirus mutation discovered in the south of England, officials are monitoring the situation to ensure that the strain does not spread to America, although many experts believe that the variant is already in multiple countries and purely discovered in the UK due to their stringent testing facilities.

As the strain is believed to be up to 70% more infectious, anyone wishing to enter the US who has traveled from the UK must provide proof of a negative Covid-19 test within the three days prior to their flight.

Los Angeles health officials have confirmed they are already testing for the new mutation with Dr. Peter Chin-Hong of the University of California, San Francisco School of Medicine telling ABC-7 News that he “wouldn’t be surprised that it’s already here.”

It was hoped that the distribution of the vaccine would be in place by now however it is now believed that the start date has been pushed back several months. Operation Warp Speed had announced they expected to administer the vaccine to 20 million citizens by the end of 2020; a target that was not reached after only 1.9 million people received the injection.

President-elect Joe Biden recently confirmed he believed that the pandemic within the US would get worse before we start to see any improvement saying, “One thing I promise you about my leadership during this crisis: I’m going to tell it to you straight. I’m going to tell you the truth. And here’s the simple truth: our darkest days in the battle against Covid are ahead of us, not behind us.”