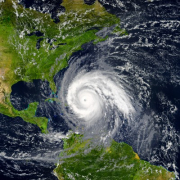 The world may well have been distracted by the continued prevalence of COVID-19 this year but, be under no illusion, the impacts of climate change have continued to roll out across the globe albeit out of the mainstream spotlight. Here are some of the most alarming climate-related events which have taken place during 2020, bringing with them a stark reminder that we still have much to do to prevent further catastrophic changes to our planet.

Bushfires
Bushfires are not a new phenomenon, but they seem to have escalated in terms of intensity and sheer impact. The bushfires in southeastern Australia ignited in mid-2019 and continued through to March 2020. During this extended period of time, around 11 million hectares of land was destroyed. According to reports in Science News, experts have suggested that climate-influenced temperatures raised the wildfire risk by 30 percent. This explanation is that the prolonged heat caused by climate change had led the bushes to be exceptionally dry and ‘like tinder’. This meant that any naturally occurring fires were likely to spread much faster than previously experienced, making them even harder to control. Whilst certain measures can be taken to slow down the fire’s progression, there does reach a point where the fires become out of control and simply have to be left to burn out.

In September, The New York Times reported how ‘mega-fires’ were ripping through Oregon, California and Washington State. It revealed that in Oregon, blazes were seen reaching into areas which had previously remained untouched by fire for decades. What is perhaps most worrying about these new mega-fires is the sheer amount of smoke that they produce. These giant plumes can travel high into the atmosphere and there is concern that they could potentially trigger chemical reactions which could further damage the Earth’s ozone layer.

Thawing Permafrost
It isn’t only fires that we need to be concerned about, as the increasing temperatures are leading to thawing permafrost. Not only does this mean that sea levels are rising, but it also leads to increased levels of methane being released which are another damaging greenhouse gas. According to an article on AtoZ CleanTech around one-quarter of the ground in the northern hemisphere is permanently frozen and it is thought that there is almost twice as much carbon contained in it that is currently present in the Earth’s atmosphere.

The difficulty with thawing permafrost is that there is very little that can be done to slow it down, as the impacts are driven by generally rising temperatures across the globe. Unless we can take action to slow down the gradually increasing temperatures on the planet, the permafrosts will continue to melt and an ever accelerating rate.
This year, the temperatures around key permafrost grounds have continued to rise to record levels. As reported in Science Magazine, on 20th June in the town of Verkhoyansk, a town in Verkhoyansky District of the Sakha Republic, Russia, located on the Yana River in the Arctic Circle, temperatures reached 38 degrees Celsius. This area is known to be one of the coldest inhabited places on earth and this temperate was the hottest ever recorded in the arctic. Experts have stated that the record-breaking heat in Verkhoyansk “would have been effectively impossible without human-induced climate change.”

Hurricanes
Of all of the world’s natural elements, wind can be one of the most destructive in the form of hurricanes and tornadoes. We have long been aware of the regular cycle of ‘hurricane season’ which typically takes place through June through November in the Atlantic region, however this year it was expected that there would be around 18 named storms compared with the average of 12. Later on, this figure would be increased to around 25 but even this prediction fell short of the final figure. By the middle of November, there had been around 30 named storms, a number which well and truly smashed through the previous record set back in 2005.

According to The National Oceanic and Atmospheric Administration, this is the fifth consecutive year with an above-normal Atlantic hurricane season, with a report 18 ‘above-normal’ seasons occurring out of the last 26. The reason behind the rising hurricane levels is the ‘warm phase’ of the Atlantic Multi-Decadal Oscillation (AMO). This started in 1995 and has contributed to stronger, more enduring storms in recent times. Whilst hurricanes don’t have as much of a direct link to climate change as other natural phenomena, it is believed that warmer oceans are contributing to the formation of tropical cyclones, the increased intensity of the storms, the speed at which they can strengthen and their duration.

None of the occurrences which happened this year are thought to be isolated incidents, which calls into question just what we can expect for next year. What is clear is that the arguments for human-induced climate change are becoming increasingly stronger and harder to deny.

The Good Things That Happened in 2020
Scroll to top