Blog - Latest News
You are here: Home1 / News2 / Science News3 / Greenland Will Be Shedding Its Ice at a Record Rate by 2100 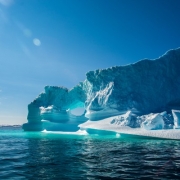 Fears over the impact of global warming on the world’s ice sheets has been reinforced by news that by 2100, Greenland is expected to be shedding ice faster than at any time in the past 12,000 years.

The report featured in the October edition of Nature and analyzed how the melting ice levels are increasing compared to previous levels. One of the biggest impacts of melting ice is of course rising sea levels, the consequences of which are far reaching. Even though reports suggest that Greenland’s melting ice is contributing to rising global sea levels by just 0.7 millimeters per year, the impact of this over time is extremely significant. In a clear example, some reports have suggested that by 2100, the sea level could have risen by 1.5 meters around the Maldives islands, resulting in a loss of around 77% of its land area.

In order to gain a bigger picture of past, present and future ice loss, colleagues at the University of Buffalo in New York, headed up by glacial geologist Jason Briner, created a detailed timeline of how the ice sheet has evolved over a period of 12,000 years, with projections right up until 2100. In addition, they also conducted a series of climate and ice physics simulations which were noted to be much improved since previous temperature reconstructions, therefore providing a more realistic predictions outline of future events.

A particular area of interest was a known previous ‘warm period’ which started between 7,000 and 10,000 years ago. During this particular phase, the team estimated that Greenland’s ice was reducing probably at a rate of around 6,000 billion metric tons per century. It appears that this average loss level remained fairly stable over the centuries, however in the past 20 years the pace seems to have accelerated to around 6,100 billion tons per century.

The increase in ice loss and its connection to global warming continues to bring in much debate from both sides of the fence. Some are certain that it is evidence of man’s impact on the world and that our continued exploitation of the natural world and its resources is leading humanity to unimaginable doom. Others are less convinced and believe that this is part of the Earth’s lifecycle, with global warming being a natural and unavoidable part of its evolutionary path. It appears that the predictions provided by the team take into account both perspectives, as the ice loss outcomes for the next century are provided on a spectrum, from slight increases to an almighty surge.

The team are under no illusions that the pace of ice loss will accelerate in the century ahead, whatever happens, but by how much is really dependent on greenhouse gas emissions. If levels of emissions remain at the lower end, the ice loss is likely to be somewhere in the region of 8,800 billion tons per century. But more worryingly, if the emissions are at the higher end, we could be looking at ice loss rates of up to 35,900 billion tons per century. The overriding message here is that an increasing rate of ice loss will happen regardless of what humanity does, but we will play a part in by how much, and how devastating this will be for future generations.

Such findings naturally fuel pressure to reduce greenhouse gas emissions. There are many ideas for how individuals can contribute to a reduction in emissions, including reducing their use of gas-emitting transportation and opting for walking, biking or car-sharing. Another important area that has been gaining greater exposure in recent years has been the consumption of animal products. It is reported that raising livestock for meat, eggs and milk generates around 14.5% of global greenhouse gas emissions. This is in fact the second highest source of emissions and is greater than all transportation emissions combined. Furthermore, it is estimated to use about 70% of agricultural land, and is one of the leading causes of deforestation, biodiversity loss, and water pollution.

Many experts and analysts have warned that we are currently at a crossroads for the future of life on earth. There is evidence that if we take the right steps, we could help to slow the rate of global warming and the associated impacts of this, such as the speed at which our ice sheets are melting. Whilst there are those who are skeptical about just how close to crisis the world really is right now, I’m inclined to think that perhaps we should all err on the side of caution and assume the worst case scenario is going to happen, so that we can take steps now to prevent it happening for real. Better the devil you know than the devil you don’t, right?

POTUS and FLOTUS Test Positive For Coronavirus
Scroll to top